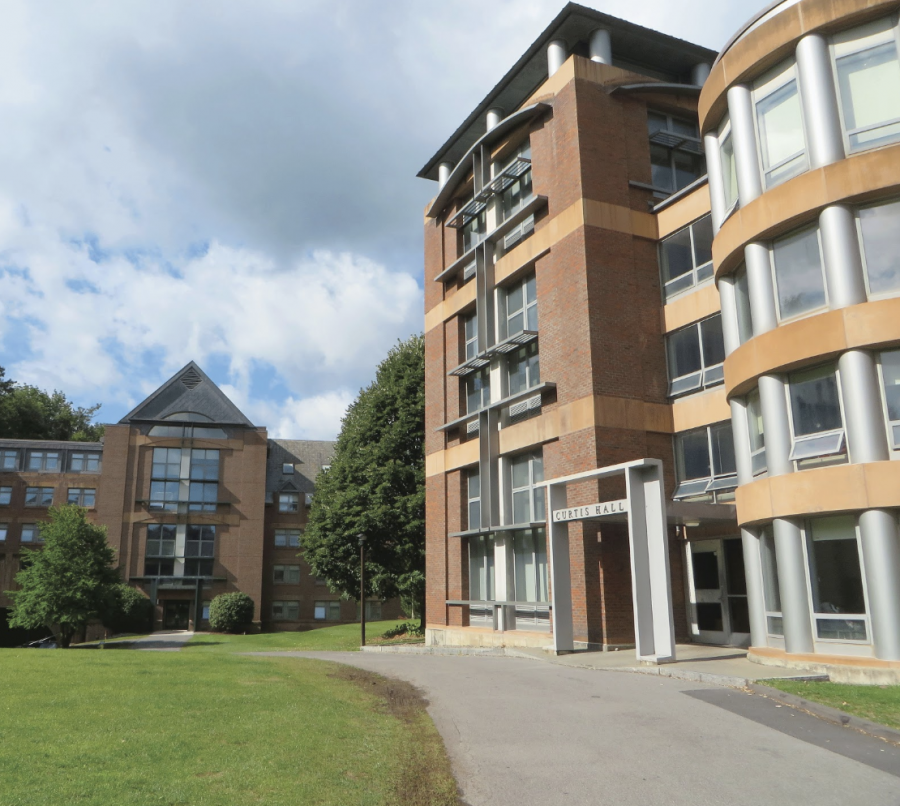 The University recently released iconography representing each of the four Residential Commons communities in tandem with the beginning of Colgate’s third century. The crests embody Colgate’s principles of community and academia, representing the people after which each common was named.

“It was a long process; it took about two years of careful thinking about the people for whom the Commons are names, their legacies, and how we could capture that in symbols,” Simonson said. “Throughout the process, the Commons faculty directors worked closely with Communications to share ideas and make suggestions about each iteration created through the design process.”

The Brown Commons Crest represents Coleman Brown, a graduate of Princeton University and Union Theological Seminary. Coleman Brown joined the Colgate faculty in 1970 as an instructor of philosophy and religion. Before arriving on campus, Brown participated in the Civil Rights Movement, joining clergy protests against the Vietnam War. He won multiple teaching awards during his time at Colgate, where he served as University Chaplain, Dean of Students, Chair of the Diversity Committee and Chair of the Department of Philosophy and Religion.

According to Simonson, the Brown Commons Crest encompasses Brown’s compassion.

“One thing Professor Brown often said was that in any gathering of people, there were seekers, believers and doubters. To remind us of this, our crest has several icons repeated three times.” Simonson said.

Each symbol on the Brown Commons crest is repeated three times. A stripe resides diagonally in the center of the crest with three compasses on it.

“Professor Brown was referred to by his colleague Professor Jane Pinchin as the moral compass of Colgate University, and we hope these symbols will be a reminder of the importance of both finding and serving as a moral compass in one’s communities,” Simonson said.

The Ciccone Commons Crest represents Diane Ciccone ’74, one of the first 132 women to enroll in Colgate. She went on to become a founding member of the Alumni of Color organization. Ciccone built her career in law and journalism. She was both a member of the Alumni Council and the Board of Trustees, volunteering on behalf of the University and serving as a mentor for students.

Thirteen stripes lay across the crest in alternating black and white, suggesting light cutting through darkness to represent and enlighten Diane Ciccone’s work as an author and attorney. The top of the crest is lined with three books to represent Ciccone’s personal, historic and academic journey.

The crest for Dart Colegrove commons represents Mabel Dart Colegrove, Colgate’s first full-time female student. She spent seven semesters at Colgate, beginning in 1882, before she was forced to transfer. After graduating from Vassar College, she became a librarian and teacher. She was recognized by Colgate as the first female alumna in 1947, seven years after her death.

The Dart Colegrove Crest is divided into four sections. The upper left and bottom right sections each have a leaf, symbolizing Dart Colegrove’s growth from farmer’s daughter, to scholar, teacher and librarian. The upper right corner contains a sun and the lower left corner holds a moon to represent day and night, guiding lights of endurance and overcoming.

The Hancock Commons is named after Gordon Blaine Hancock. Hancock received his bachelor’s degree at Colgate in 1919 and a divinity degree from the Colgate seminary, known as the Colgate Rochester Divinity School, in 1920.

Hancock went on to receive a master’s in sociology from Harvard and later became a sociology professor at Virginia Union University. At Virginia Union University in 1922, Hancock taught the first academic course on race relations, organized a school of race relations in 1931 and pastored the Moore Street Baptist Church in Richmond. Hancock became a leading spokesman for African American equality. He created a platform for himself by writing a newspaper column and by co-founding the Southern Regional Council. He was awarded an honorary doctorate from Colgate in 1969.

The crest contains symmetrical steps on both sides ascending to the top of the crest to represent Hancock’s climb in continuously educating himself and improving his humanity. There are two large parallel bars in the center of the crest symbolizing Hancock’s lifelong commitment to equality and civil rights.

“We are very happy with the Hancock Crest, it symbolizes equality, inclusion and our work for a better community-values at the center of the Hancock Commons,” Barrera said.