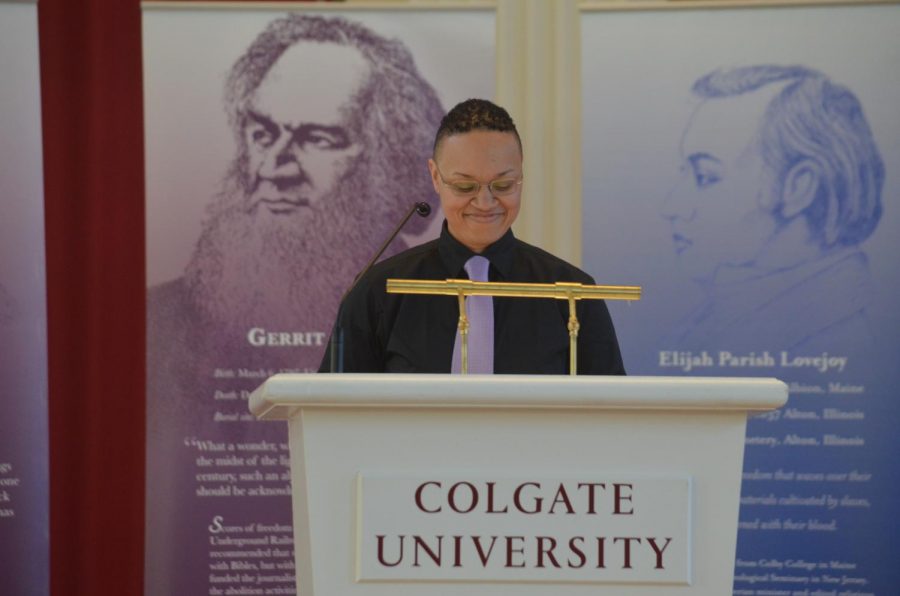 Rosbrook noted slight adjustments to the ceremony, as she and her team strove to highlight the center’s student staff. In particular, senior Anthony Wright, the Vice-President of the on-campus

organization Brothers, Treasurer of the Black Student Union (BSU) and ALANA ambassador, emphasized the work of his roommate and close friend Johns, who delivered the student speech.

“Just knowing the work that he is trying to accomplish on campus touches to the things that MLK was striving for and the things that different activists have strove for. [His role as] co-president of the Student Government Association and the initiatives that he is planning with his executive team meant that he would be a good fit to try and bridge the conversation for different groups among campus,” Wright said.

Rosbrook highlighted ALANA ambassador Saenz’s talents, who performed  “Lean On Me” by Bill Withers at the event. Darko, who previously sang at ALANAPalooza in September 2019, opened the MLK week kickoff event. Darko is an active member of the African Student Union, BSU and the founding Choreographer and current President of Afrobeat. She has performed with the University Chorus, Soujourner’s Gospel Choir and the Concert Jazz Ensemble, among other groups. At the opening ceremony, she performed “Rise Up” by Andra Day.

“Activism is very hard. Sometimes just going to class is very hard because of certain contexts and ‘Rise Up’ is a song that validates that and says: Yeah, it’s hard, but we can get through it, and not only survive, but actually live,” Darko said.

“They were moving and beautifully done. However, it was sad to me that class wasn’t canceled in honor of the day and that only a small fraction of the student body showed up,” Langen said.

Although Lane felt content with the array of faculty, staff and senior leaders who attended, Rosbrook and Wright shared Langen’s disappointment that more students did not participate in the ceremony, despite the fact that the the half-day schedule allowed every student to attend.

“I hope that there will be more support, particularly from the faculty, in the future to require the students attending class to attend the ceremony as part of something that starts the semester in their program. I think there are so many things that people can learn from attending the event aside from the historical part, whether that’s for building community, a sense of belonging or acting as one unit,” Rosbrook said.

The Opening Ceremony on MLK Day is part of a larger series of events in honor of the civil rights activist. Black Lives Matter co-Founder Opal Tometi headlines the week of events, speaking in the Memorial Chapel Thursday, January 30. Other events included the Max Shacknai Center for Outreach,

Volunteerism and Education’s (COVE) MLK Day of Service Friday, January 2, as well as brown bag events hosted by ALANA and Africana and Latin American Studies (ALST) on Monday, January 27, and by the Center for Women’s Studies on Tuesday, January 28. Lane said she hopes the series of events celebrating Dr. King inspire change and reflection on campus.

“My hope is that people walk away from these weeks feeling empowered and feeling like they can be part of making change. I just want folks to really open their minds and remember that a really great man did a lot of really great things, and a lot of us wouldn’t be in this room, let alone this campus if it weren’t for him,” Lane said.