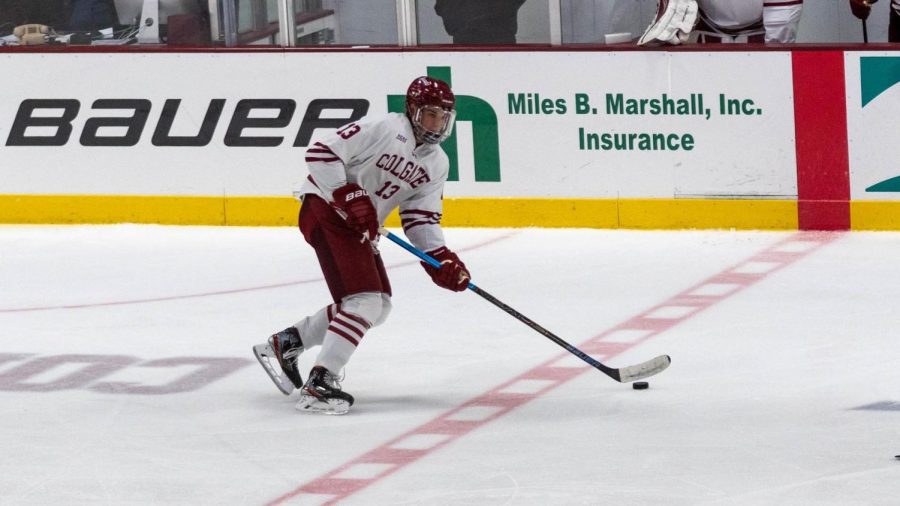 Eric Fishbin: Hey Matt, thanks chatting with me. It was your second time competing in the World Junior Ice Hockey Championships (WJC), I’m curious how last year’s experience might have helped with this year’s tournament?

Matthew Verboon: I think being a returner from last year’s World Juniors helped greatly with me this year. Last year, I played a lesser role being a younger player on the team. Beating Sweden and making it to the Semi-Finals [last year], which was a bit of an upset, definitely gave our entire team, with a large number of returners, a boost coming into this year. I think a lot of it was also confidence, and having done it already there were fewer nerves of playing on such a big stage.

EF: You were the only NCAA player on the Swiss roster. Did you feel the need to adjust your game in any ways while competing on an international level? Were you able to bring anything different to the ice or the locker room?

MV: I think the NCAA prepared me well for the World Juniors. Playing against guys up to 25 years old really forced me to adjust my play and has grown my game. Then returning to a younger U20 level, I felt like it was physically easier. I was one of the biggest and strongest [in the WJC] versus lacking a physical dominance in the NCAA. I think being around older guys helped me have a little more of a leadership role with the Swiss team and bring the experience of the NCAA in the locker room. There is also a question of practice competition; here at Colgate we are continuously battling hard at practice, striving to get spots on the roster come game time. This has really helped me develop and become a better player.

EF: In the first game against Kazakhstan —  scoring under three minutes into the game to open the tournament — was that the dream start you had in mind?

MV: It was [like] a great dream, especially this year at Colgate I feel like bounces haven’t been going my way and [I’ve] struggled to find the back of the net. Getting the first goal of the tournament was huge for our team and for building my confidence throughout the tournament. Also, having not scored in last years tournament, it was huge to be able to score early and almost a sense of relief, certainly a very cool experience.

EF: Who was the toughest team you faced during the competition? What about their style stood out to you? Did seeing players from leagues around the world have any effect on your game?

MV: I think the best team I played against was Team Russia. They had a mix of skill and grit and were very hard to play against. Especially [seeing them] in the quarter finals, they played a great game. Despite a 3-1 score, they were the toughest team to play against. A lot of the Swedish players were very impressive, even though as a team they did not get the end result [they wanted]. They had so many high-skilled players that I could look at a learn from.

EF: Do you take any extra pride in finishing ahead of the USA, considering you have several teammates from the States, or did you have higher ambitions for the Swiss team?

MV: I think it is definitely cool to finish ahead of the United States, especially being here for school and having American citizens on my team. It is just something small I can jokingly bring up. In terms of Swiss Ice Hockey as a whole, it is encouraging getting these results. Being a country with just a fraction of the USA’s total hockey players, competed and finishing ahead of them just shows the great work put in by Swiss coaches to develop our players.

EF: After returning to school and NCAA competition, what has the adjustment period been like and how do you think you benefitted overall from participating in the WJC?

MV: I think going to a large-scale tournament like this always gives you confidence when coming back to your regular team. The main adjustment will definitely revolve around getting used to playing older and stronger players again. In the WJC, on the larger ice surface, it is important to rely on skill and puck protection, especially against the highly skilled teams. Coming back here means adjusting to a more grinding style of play, and play a more physical style of game.