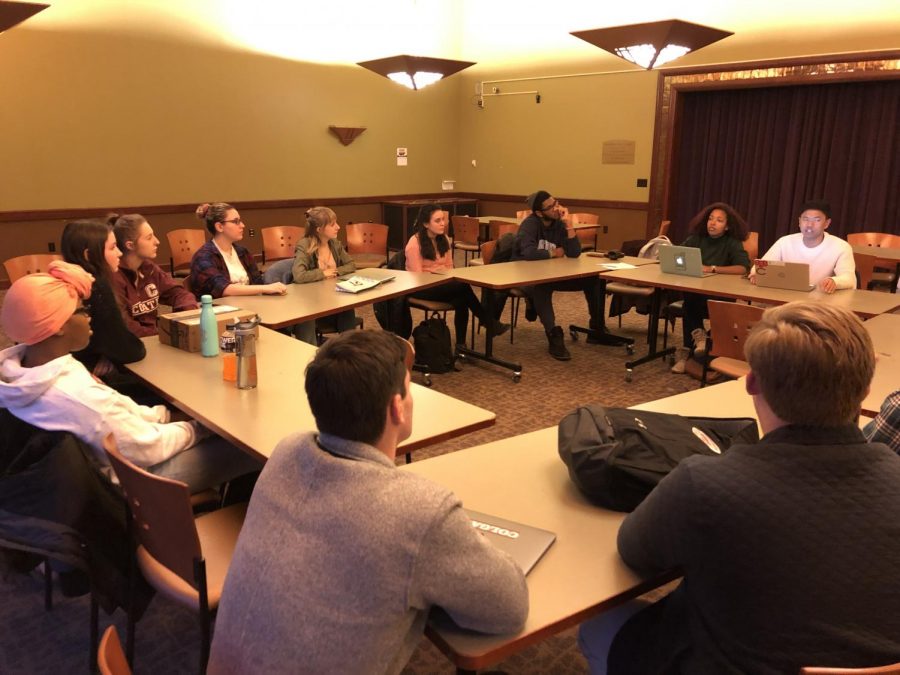 SGA co-presidents and seniors Chris Johns and Kate Bundy, spearheaded the event. Johns expressed that the intended impact of the event held immense importance within the goals of the current SGA administration.

“The Roundtable came out of a desire to break down barriers between student groups on campus. The focus on bringing student leaders together made it a central piece of Kate and I’s focus on community development on campus. We have been planning for the Roundtable since the summer and we are incredibly proud of the work that was done by the executive staff who carried out the event,” Johns said.

Johns spoke about his expectations for the Roundtable, stating that they continued to transform as the Roundtable planning committee began to pinpoint the goals and objectives of the event.

“As the Roundtable drew closer, I wanted it to be a place where student leaders were able to honestly discuss some of the largest issues on campus, hear different perspectives on those issues and meet other student leaders. It is rare on Colgate’s campus that we can unite so many different people together for a common purpose. That should not be the norm, especially not on a campus as small as ours. Many of the student leaders felt that they would benefit from having more events like the Roundtable where they were able to engage substantively. SGA will continue to provide resources and attention to community development in order to spur a healthier campus climate,” Johns said.

Senior John Bermudez served as one of the moderators for the roundtable session focusing on social hosting and inclusion on campus. Bermudez said that he chose to participate in the event because of his role as a Broad Street Liaison within SGA, as well as his affiliation with a Greek-Letter organization on campus.

“There is a great deal of disconnect between Greek and non-Greek organizations. We wanted to provide a forum where people could hopefully address those misconceptions and give the students a chance to air out grievances they may have with the school in terms of hosting and inclusion. The Roundtable showed us that many misconceptions do exist on both sides and that we need to take steps to address those problems. It also showed us that a lot of organizations, whether Greek or non-Greek, have problems with the administration in how events are handled,” Bermudez remarked.

Senior Nicholas Quinn served as a moderator for the session on campus finance and the functions of the SGA Budget Allocations Committee. Quinn serves as the current Treasurer of SGA, and said he hopes to improve transparency between the BAC and the student body at-large.

“​I also wanted to make sure student leaders knew about changes to the BAC procedure book and bylaws. I think that we got some issues flushed out and came up with some solutions, although I don’t want to speak for the student leaders who attended the event. I was super happy with how the event went and was glad to have an open conversation about pathways to funding on campus,” Quinn said.

“The intended purpose of the session was to talk about combating bias, ignorance and racism on campus through student organizations,” Ahmad said.

Ahmad said he felt the roundtable event helped to bridge gaps between the experiences of student groups on campus.

“The clubs the students represented were pretty diverse, but after some discussion, they all realized that the challenges they faced were quite similar…the student leaders agreed to greater and more consistent collaboration in the future,” Ahmad said. “I learned a great deal about the different experiences the students from marginalized communities have on campus. Being one, I have my own set of experiences, but it was interesting to hear other similar, yet different experiences.”

Following the event, Johns outlined the larger vision for the roundtable and its future role on campus.

“The Student Government Association will be evaluating the longer-term implications for the Roundtable. The working group chairs took extensive notes that will give us a starting point on addressing some of the issues presented to us during the working group sessions. I am considering tying the Roundtable into the SGA Bylaws by making attendance required for all SGA recognized groups. It is my hope that the Roundtable occurs at least once an academic year,” Johns said.