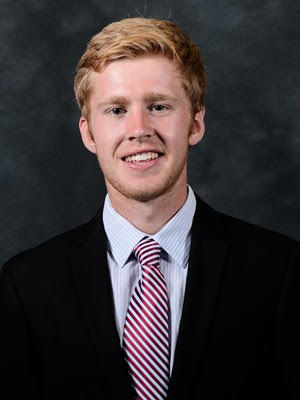 From his first year to senior year, Luke Myers has successfully made his mark on Colgate’s campus. As a recruited track and field athlete, Myers came to Colgate with high ambitions. He excelled during his first year as he set the first-year record in the 800-meter distance event. Myers’ athletic career has only progressed over the years, and he has now flourished in his role as track captain.

Since childhood, Myers has always been a runner. While his athletic capabilities debuted on the soccer field, in eighth grade, Myers chose to follow in his dad’s footsteps and took on track and field, as well as cross country. He has been training as a middle-distance runner ever since.

As a student-athlete, Myers explained how the structure of practice and schoolwork have actually helped to keep his grades up and running times low.

“I love competition, so having that fire in me keeps me going in a lot of other ways too. If I don’t have competition in my life, my academics will slip and so forth,” Myers said.

Myers’ contributions to the athletic community on Colgate’s campus is not limited to the track and field team or cross country team. Myers is the co-president of the Student-athlete Advisory Committee (SAAC).

“It’s our job to make sure that all the student-athletes at Colgate are having the best experience they could have. That comes down to working on things to improve the lives of student-athletes.”

Myers describes one project that was initiated this year by the SAAC in which “fueling stations” were set up in Reed for student-athletes. These fueling stations consist of various snacks for athletes to enjoy after practice or lift. Another project that was successfully carried out by Myers and the other members of SAAC was the implementation of athletic stoles, in addition to academic stoles, in order to fully recognize and honor the hard work and dedication of each student-athlete at graduation.

“Things like that is what we do; whenever there is a need from student-athletes, we try to be there for them and accommodate them as much as possible,” Myers said.

Graduating as a political science major this spring, Myers aspires to go into public service and work in the government. He wants to take a break from running after graduation and eventually come back to it naturally or pick up some other interest. While Myers approaches a new chapter of his life, come this spring, his dedication to running and the mark he made on Colgate will not be forgotten.