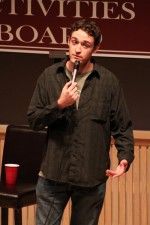 “I sometimes speak in a Russian accent to avoid getting mugged.”

This was just one of the many ridiculous lines that came from Dan Soder, one of the comedians featured at last Friday’s “Com­edy Central Live at Colgate.” The event, which was organized and presented by the Colgate Ac­tivities Board (CAB), showcased comedians Dan Soder, Jermaine Fowler and Sheng Wang, who performed for students in Olin Hall’s Love Auditorium. Some of the comedians had performed on Comedy Central doing their stand-up routines.

Student members who serve on CAB’s special events committee were largely responsible for mak­ing the event happen. Last year, the same group of students put on a similar comedy night that was very successful, so they hoped that this year would be no different. The ma­jor difference was that last year’s per­formers were from College Humor, a humor website.

“‘College Humor Live’ was a re­ally big success last year, so we fig­ured that bringing another group of comedians would also bring a lot of people,” Special Events Executive ju­nior Rachel Simon said.

As for how the students were able to get the Comedy Central comedians here, the process began before the school year.

“Over the summer, we had an agent that we worked with…he con­tacted us and told us that they had this different group from Comedy Central coming and wanted to know if we want­ed them to come to Colgate,” Special Events Executive senior Jamie Gershel said. “We had been working with him since August to get them here.”

When com­pared with last year’s comedy event, members of CAB were pleased with this year’s outcome, but felt that the previous event had lured slight­ly more of an audience.

“I think ‘College Humor Live’ was a little bit more popular,” Special Events Executive senior Kristin Ellis said. “I feel like it’s more famous with the website and whatnot. This drew a strong turnout, so we were impressed overall…hearing ev­eryone’s reactions, everybody was really positive about it and really loved it.”

Overall, the members of CAB who put on the event felt that it was definitely well received.

“I would say it was a big success,” Gershel said. “They were really fun­ny, well received by their audience… Almost every seat in Love was filled. When we spoke to the comedians afterwards, they had a really great time, which I think is reflective of how the event went overall.”

“They were hilarious; all three of them were so funny,” Doering said.

The students who organized the event also felt that the audience was very receptive to the performers’ different styles of comedy.

“I would say each of them had a different humor style, so I guess it depends on what you like,” Ger­shel said. “I thought all of them were funny, but I could see how some of the jokes they made might not go over well with everyone, but I didn’t hear of anyone saying negative things.”

“I guess some were more vulgar and racist…than others, but I think overall, everybody was still laughing – nobody seemed uncomfortable or got up and left,” Doering said.

The organizers in CAB feel that these kinds of comedy events are great for both students at Colgate and the comedians themselves.

“I think college students are a target audi­ence for a lot of these comedians, and I think that [the comedians] get really excited to come to college campuses,” Simon said.

“Their humor is geared toward us. I don’t think it would go over the same in a crowd of 30 year olds,” Ellis said.

Due to its success, it is likely that similar comedy events will take place going forward.

“I think it shows that bringing comedi­ans to campus is always going to be pretty popular,” Ellis said. “Both years we had a pretty good turn out. It’s definitely some­thing we will look into continuing to do in the future. So stay tuned!”