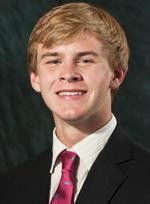 Why James? James scored the game winning goal in front of 1,664 fans against Syracuse this past weekend.

1. You scored the game-winner against Syra­cuse. Describe the play that led to the decisive goal.

Nick Arpey played a great ball into the box and the Syracuse goalie could only get a tip on it. I just anticipated the ball going past him and got a shot off from a tight angle that was lucky enough to go in.

2. The game was played in front of a large crowd of 1,664 fans. What type of atmosphere did that create?

The atmosphere was amazing! It was great to see so many students out there, and it really helped get the best out of us. I really enjoyed playing in such a supporting envi­ronment. The atmosphere contributed to our success.

3. As a first-year, what are the challenges you have in transitioning your game to the collegiate level?

The main transition for me is the speed of play and the physicality. Everything hap­pens a little bit faster than the level of play before, and the referees seem to allow much more physical play.

4. Although the Raiders controlled the majority of possession throughout, Syra­cuse hung tough and kept it a close game. What was it about their style of play that allowed this to happen?

We did a great job of keeping possession throughout the game, which was something we wanted to do. Syracuse did a very good job of staying organized. They played a low pressure defense and allowed us to keep the ball in our defensive third and then would pressure hard in our attacking third, making it difficult to break them down.

5.Your next game is against Hartwick, on Wednesday at Van Doren Field. What does the team need to focus on to achieve a positive result?

We just need to keep working hard and completely focus on Hartwick. They are a great team and will be a great test for us. I believe if we continue putting the work in and stick to our game plan, we should have a very successful night.