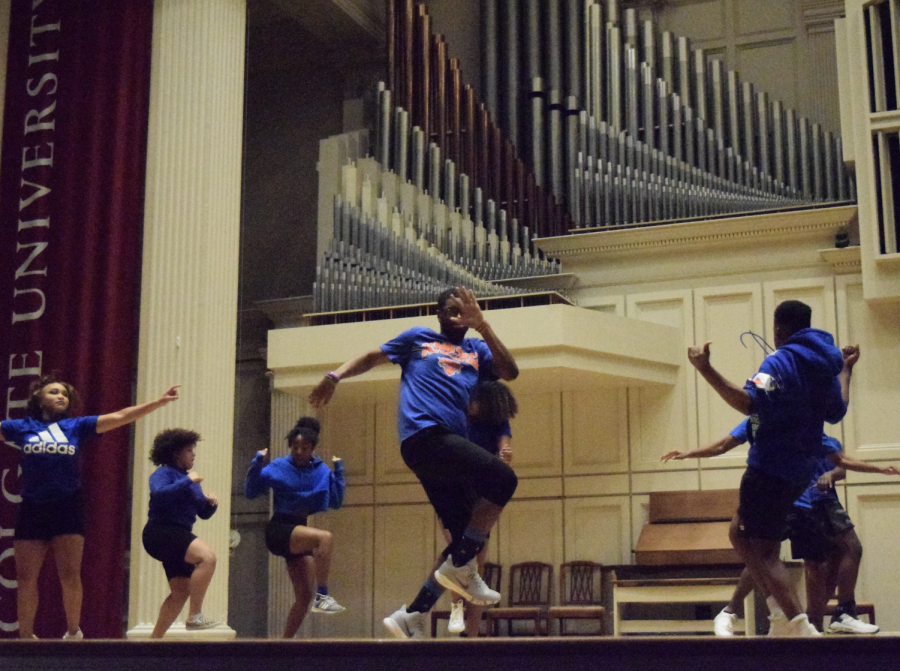 While preparing for this semester’s Dancefest, Groove Dance Troupe co-leaders seniors Grace Cooney and Elisabeth Galgano received a song submission from MELANATED, a dance group for students of color that performs predominantly in the hip-hop style, that according to Cooney, “had more profanity than most of the others, prompting a discussion about what is acceptable and what may be perceived as ‘too much.’” The song was submitted in preparation for the event that occurred on Saturday, December 3 at 6:30 pm in the Colgate Memorial Chapel. This resulted in a discussion with Director for the Center for Leadership and Student Involvement Drew Harris and Program Coordinator for the Center for Leadership and Student Involvement Marsha Collett, and eventually included Provost and Dean of the Faculty James A. Storing Professor of Religion and Africana & Latin American Studies Tracey Hucks and Vice President and Dean of the College Paul Mcloughlin.

Cooney and Galgano were elected as Groove leaders last spring, stepping into the role as group leaders and in charge of planning Dancefest. Cooney, who has been on the team since her freshman year, explained the process to prepare for the event.

“In preparation for Dancefest, we ask each dance group to upload their music one month in advance so we can review each song and figure out all the timing for the show. This is just one small piece of preparing for Dancefest–groups must also rehearse and prepare their dances, and submit to us other important pieces of information such as costume ordering info, program info and more,” Cooney said.

“When we asked for clarification on what they meant by that, they responded saying, ‘some audience members may take offense to such words since they are often used as derogatory references to women and people of color.’”

Wright and Brasswell said they felt the action taken was inappropriate, and scheduled a meeting with Groove and CLSI advisor Marsha Collett.

“In the meeting we were asked to justify our usage of the song and also proposed a different section of the song that wasn’t as explicit. After the meeting we sent a revised mix to Marsha to be reviewed by Drew Harris. Instead of being told by Drew and Marsha that the mix should be changed, we were told by Chris Johns who is co-president of SGA. A meeting was held with the co-presidents and CLSI to determine what mixes were too explicit for Dancefest,” Wright and Brasswell said.

According to Wright and Brasswell, MELANATED was the only group whose music was determined to be inappropriately explicit. Cooney explained that their advisor, Marsha Collett, worked with the Groove Captains to review all music. As of now, there are no rules about the use of expletives in Danfest songs.

“Since Dancefest is usually a kid-friendly event, we initially asked the group to change that section of their music, which they did. But that instance prompted a larger conversation within CLSI about whether or not it is really appropriate for Dancefest to be a family friendly event,” Cooney said.

According to Cooney, after asking one group to change their music, CLSI advisors Drew Harris and Marsha Collett listened to the remaining submissions and recommended all groups “clean up” their music due to the history of the event being a community event. However, Cooney and Galgano expressed that due to the proximity of the event, they could not ask all groups to completely change their music. It was at this point, Cooney explained, that Mcloughlin and Hucks were brought into the conversation and the discussion turned toward whether Dancefest should be opened up to the community.

The final decision, according to Cooney, was made under the advice of Harris, Collett, Hucks and McLoughlin. The group decided to allow all remaining submissions to stand and create a content warning for the show.

“This warning went on the calendar event, the poster, the livestream, and more. Next semester, we hope to meet with all of the dance group leaders and figure out how we’d like music to work going forward,” Cooney said.

According to Wright and Brasswell, they received no formal communication from Groove or CLSI about their final decision on their music, infoming Groove themselves that they decided to change their music altogether in response.

“We do see how the mix is inappropriate. However, [Groove leadership’s] phrasing in the email was highly offensive. It felt as if a group of white women were telling a group of black

students that they couldn’t use the n-word,” Wright and Brasswell said. “But why is the [n-word] an issue? This a question the Colgate community needs to grapple with.”

Wright and Brasswell said they feel MELANATED has previously been policed and held to different standards than other dance groups.

Collett is the CLSI advisor to the 20 different Colgate dance groups and stated that any decision related to Dancefest is up to Groove, Cooney and Galgano.

“As the host of independent student organizations, the final decision on the content of the show is up to the discretion of Groove and its leadership,” said Collett. “The show was, as always, an amazing performance by all of our dedicated students whose passion to dance is inspiring.” Harris made no comment.

Wright and Brasswell said that the music controversy exposes larger issues with the way Dancefest is run, such as the fact that Groove runs the entire event all by themselves. The pair proposes a committee in which leaders from different groups each take on responsibility, which they argue will create an “equitable dancefest” and relieve Groove of some of their responsibilities.

“All student dance group leaders should have some say in what happens. While we understand Groove started Dancefest, there are other groups including MELANATED that draw large crowds to the event,” Wright and Brasswell said.  “It is only fair that if we contribute to the success of the event that we have a say in how the event is run.”