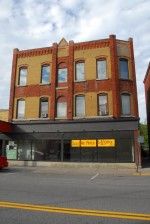 Hamilton is looking for a new tenant. Parry’s, “the modern day general store,” relocated this sum­mer from 20 Utica Street to 100 Utica Street to better serve their customers. The new location, which officially opened on June 24, offers a larger catalogue of items than was available at the former store.

The family-run business, which was founded by William and Re­becca Parry of Hamilton, NY in 1979 in Oriskany Falls, has been in Hamilton for about 25 years. And while the new store is still in Ham­ilton, it doesn’t necessarily feel that way for some students.

“I think it’s pretty inconve­nient,” sophomore Rohan Mehta said about the new location. “If you go to the bookstore and [then] want to buy something [at Parry’s], you have to go so much further. It’s not really walking distance anymore.”

But not everyone finds the relocation to be a grave inconvenience.

“I love Parry’s, but I’m glad it expanded because they were lacking some things,” sophomore Alexandra Petrini said. “I just went the other day, and I could find everything so much easier.”

As to what the new tenant should bring to the Colgate and Hamilton community, Colgate students do have some suggestions.

“I think they should put in an­other grab-and-go sandwich place because Roger’s closed down,” Pe­trini said. “Downtown, we’ve got really nice restaurants, but we don’t have a place where you can just go and get a wrap.”

“I would like to see a new clothing store,” first-year Amanda Ricca said. However, only time will tell what will take the old Parry’s spot.