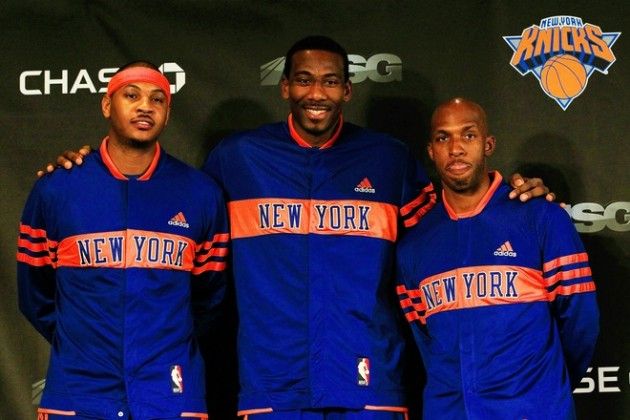 If it is April and you are reading an ar­ticle about the New York Knicks, one of two following events must have occurred. Either the Knicks are in trouble for yet another Isaiah Thomas sexual harassment suit, or they have agreed to trade Carmelo Anthony to the Chinese Basketball Associ­ation’s Foshan Dralions for Stephon Mar­bury. Since I have yet to hear news of ei­ther, although I’m sure another suit against Thomas will surface soon enough, it leaves only one other possible reason that the Knicks are still in the news. Apparently, for the first time since 2004, the New York Knickerbockers are headed to the playoffs.

Before I progress any further with this article I would like to take a minute to chastise anyone who thought trading away the scrub-squad headlined by Danilo “The Situation” Gallinari to Denver for Melo would have ruined the Knicks’ chances. Although the Nuggets have landed a five-seed in the playoffs, the Knicks have reeled off seven consecutive wins to steal the six-seed from the Sixers, all the while acquir­ing one of the top offensive players in the league in Melo and a perennial point guard in Chauncey Billups. Winning.

The Knicks will face the dilapidated Celtics in the first round of the playoffs. The Celtics have played horribly since the Kendrick Perkins trade and the lack of a presence in the post has Boston feeling un­easy about this year’s post-season. Despite the fact that the Knicks play worse defense than a recreational third-grade team, the series between the two teams will be close. Carmelo Anthony has been nothing short of spectacular in recent games, as he’s hit three game-winning shots and is shooting an astounding 43 percent from behind the arc. The recent ball-movement that the Knicks have demonstrated has revital­ized their stagnant offense and optimized their ability to shoot three-pointers. The naysayers that believe Boston will sweep the Knicks away should probably take a look at the regular-season scores between the teams. Although Boston has won all three games this season, two were decided by less than four points and the Celtics have had trouble containing Amar’e Stou­demire. The center has shown offensive prowess against a Celtics team that seemed incapable of guarding him.

Since the last meeting between the Knicks and the Celtics, Chauncey Billups has recovered from a thigh contusion and, in his absence, Toney Douglas has proved capable of running the point. The minutes that Douglas played in Billups’s absence convinced Coach D’Antoni to increase Douglas’s playing time, largely due to his ability to shoot three-pointers; Douglas is shooting 38 percent from downtown.

The experience of back-up point guard Anthony Carter has played a pivotal role in establishing a more regimented offense for the Knicks. Toney Douglas and Chauncey Billups have tendencies to in-bound the ball and immediately shoot a three-pointer if they are even remotely open whereas Carter ensures that the ball is moved around the perimeter before he contem­plates shooting. Although Carter does not possess the same amount of talent that the other two point guards have, he compen­sates for it through his court awareness and enthusiastic play.

If the Knicks stand any chance of up-ending the Celtics, it is essential that rookie Landry Fields acclimates to the new Knicks offense. Fields demonstrated his gritty play by being recognized as one of the first-half sensations of the NBA sea­son, despite being a second-round draft pick from Stanford. Since the Melo acqui­sition, Fields has seen his minutes dwindle from about 30 per game to 25 as a result of his inability to score baskets. The excel­lent three-point shooter has struggled as of late to adjust to the slower-paced Knicks offense. He has scored over 10 points only once in the past seven games. Fields pro­vides a great option for the Knicks on the wing as Carmelo Anthony is almost always double-teamed in the post whenever he touches the ball. Should Fields regain his confidence and display the shooting dex­terity that he proved he has earlier in the year, the Knicks could give the Celtics a run for their money.

Although it is unanimous that the Knicks are a couple of years away from contending for a chance to play in the NBA Finals, they are undoubtedly one of the scariest low-seeded teams in the play­offs. The Knicks are severely hampered by their ability to play defense and when Jared Jefferies is your star defensive talent, you know that there’s something wrong. However, should the Knicks start out strong and shoot the three-ball as well as they have all season, New York could make it past an aging Boston team in the first round. Nonetheless, the series should be entertaining and will provide the basis for a potential New York-Boston rivalry in the future. Despite the fact that Jeff van Gun­dy won’t be present to gnaw on opposing players’ ankles, I can’t deny that watching Ronny Turiaf lay some Celtics out would be entertaining.

The play-off berth marks the Knicks’s newfound commitment to winning. How­ever, until the summer of 2012 when Chris Paul is donning a Knicks uniform, New York will have to be satisfied with just a playoff appearance.