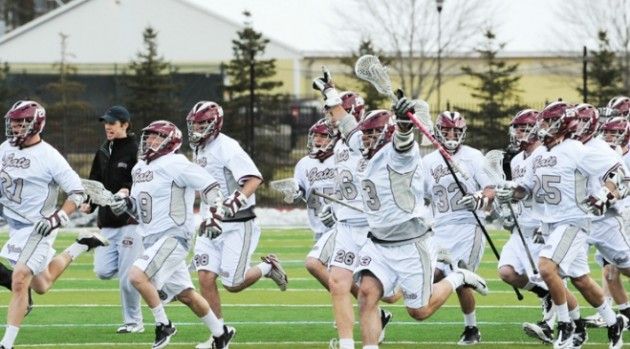 The Colgate men’s lacrosse team se­cured a bid to the 2011 Patriot League tournament with a 11-8 road victory over Lehigh on Saturday, April 9. The squad is now 4-0 in league contests (8-3 over­all) and has won its last four games. Se­nior attackman Ben McCabe topped the scoring chart with four goals of his own off of just five shots, but the Raiders re­ceived goals from a number of contribu­tors: sophomore John Donnally chipped in two goals, and five other players each notched one, including seniors Andrew Mould and Dave Tucciarone, junior Jeff Ledwick, sophomore Matt Baker and first-year Jimmy Ryan.

The scoring was even throughout most of the game, with each team trading tal­lies for the first three quarters of action. John Donnally opened the game’s scoring with an unassisted tally just 12 seconds into the match, but Lehigh countered with two of their own. Donnally, though, registered another unassisted marker to tie the game, and senior co-captain Rob Bosco found McCabe at the start of the second to give the Raiders a 3-2 lead. Le­high tied the game yet again, but McCabe answered with his second of the match to give the Raiders another one-goal cush­ion. Lehigh would tally two to begin the third, but McCabe also found the back of the net for the third time of the game, evening the score at five apiece.

Sophomore Peter Baum, the team’s leading scorer, then found senior long-stick midfielder Dave Tucciarone for a score that would mark the onset of a four-goal Colgate run. Mould dished to first-year Jimmy Ryan just three minutes later to give the Raiders a two-goal ad­vantage, 7-5, McCabe rounded out the third-quarter scoring with his fourth of the game. Sophomore Matt Baker scored the first of the fourth quarter, convert­ing on a man-up opportunity, but Lehigh stormed back, scoring the next three goals of the quarter to tie the game. Jeff Ledwick, however, scored with 3:31 re­maining to give the Raiders the advantage once again. The defense, comprised of se­nior Greg Perkins, first-year Bobby Law­rence, sophomore James Queeney and junior goalie Jared Madison, with help from Tucciarone, were able to stave off any additional Mountain Hawk attacks. Mould put the nail in the coffin, scoring a goal with just 45 seconds remaining in the contest.

A promising sign for the Raiders has been their demonstrated ability to win on the road; the team is 3-1 at home and 5-2 behind enemy lines. Two of the team’s three remaining scheduled games – against Lafayette, Bucknell and Mary­land – are away, so the team’s success on the road should bode well for them later in the season, especially if they receive a bid to the NCAA tournament. Such a bid certainly looks realistic, considering the team has moved up to No. 16 in both the USILA Coach’s Poll and the Nike/Inside Lacrosse media poll released on Monday. Bucknell sits just ahead, at No. 12, in the poll, and Maryland ranks at No. 4. Colgate continues their road streak this weekend at Lafayette, however, when they square off against the 2-9 Leopards on Saturday, April 16 at 7 p.m.