Breaking the Bubble: The French Ban on the Veil 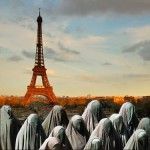 On Monday, the French government officially banned the wearing of full veils or any facial coverings in public. This comes after a year-long debate on the topic, during which supporters of the ban claimed that veils imprison women and did not uphold the French values of equality and secularism.

At a European Union meeting in Luxembourg on April 11, French Interior Minister Claude Gueant was quoted saying that, “The law is very clear. Hiding your face in public places is cause for imposing sanc­tions … [it defends] two fundamental principles: the principle of secularism and the principle of equality between man and woman.”

Critics of the ban see it as Islamophobic, because al­though the law does not directly define the niqab (a veil for the face which leaves the eyes clear) or the burqa (which conceals the entire face and body) specifically, there are very few other facial coverings that would fall under this category.

In response to these criticisms, French President Nico­las Sarkozy was quoted in the New York Times, arguing that he was not generalizing or pushing a policy that institutes an unjust fear of Islam, but that it is radical Islam that concerns him, which “does not respect French values and separation of church and state.”

Offenders of this ban face a fine of £150 ($217), as well as mandatory enrollment in a citizenship course. Those in­dividuals who force women to wear veils face a larger fine and the possibility of a prison sentence of up to two years.

There are approximately six million Muslims living France, and it is estimated that 2,000 of those (women) cover their body completely. The lower house of Parlia­ment passed the law with only one vote opposed. However, it does not appear that there is a well-orchestrated way for the police to fairly implement the ban.

It is a wonder to me that this law is important enough to pass despite the disproportionate amount of French citizens that it affects. Also, the difficulty with which the police will have implementing it raises concern.

It appears that the French government is fixated on adjusting a growing problem that they believe is get­ting worse. That is, segragation in France of the Muslim population, and the difficulties that separatism poses on French “culture,” as well as a concern for women’s rights. But one must ask the question, then, where does the French government receive the authority to determine a person’s rights on a religious level? Or any government, for that matter?

This problem very clearly reminds me of issues that Kwame Anthony Appiah brings up in his book Cosmopoli­tanism, which is now a staple of the “Challenges of Moder­nity” curriculum and was a required summer reading for the Class of 2014.

A large component of his book is showing the difficul­ty in judging other cultures, religions or tribes based on their chosen practices. If you are looking at the practice from within the religion or culture, is it unequal? Unjust? I would hope that the French government has thought hard about this question, but it is difficult to see that with such a ban being implemented.

For example, perhaps it is the women themselves who choose to wear a veil as a means of anonymity and pro­tection, or like Safiyyah Abdullah, an American who was featured in the Washington Post this week in reaction to the ban in France for her experiences wearing a niqab in the Washington D.C. area. She said in the Washington Post that covering herself to all outsiders allowed her interact with the world on her own terms. “When I dress this way, you are required to deal with me intellectu­ally and that’s it.”

Obviously the French government is concerned about a level of inequality that this sort of cov­ering might allude to, that is if a father or hus­band enforces it. However, full-face coverings are actually a voluntary act in Islam and not a religious requirement.

Another question is what is the definition of French culture and in what ways is Islamic culture a hindrance to it? What exactly about religious culture inhibits secular French life? And, how can a country with millions of different people be ex­pected to share the exact same culture? This brings us back to the question: is this ban legitimate or xenophobic? Whose interests are the French government really protecting?

I am not a French citizen, have never visit­ed France and I don’t speak any French (I wish I did!). However, I would like to consider myself a cosmopolitan, and surely, reflective of the current Colgate curriculum, all students are at least expected to consider the possibil­ity of becoming one as well. I think there is great value in becoming a cosmopolitan citizen of the world, and from this perspective, I do not believe the ban in France is fair, and I am surprised that it is legal (though I will not pretend to have a good understanding of the French legal system).

The largest concern I have with this recent law is if this is ac­ceptable then where do the restrictions a government can enforce on dress code end?

Surely some people point to airport security or racial profiling when this argument is raised, alluding to some need for security through exposure of a whole person, in case they are harboring some sort of a weapon. But there is a very big difference between security on an airplane and having it be illegal for an individual to walk around in certain clothing. I hope we never reach that position in this country, and more to the point, I hope the ban in France can somehow be re-evaluated for the sake of the minority Muslim population there who it directly affects, and to stop it from setting an unacceptable precedent that this type of law sets for democracies everywhere.