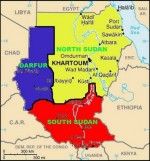 This week I thought I would bring up an important event in history that happened this year that was not previously covered in this column, and has all but disappeared from the news.

However, it is nonetheless significant to world politics and the well-informed Colgate student.

The region announced its plans for inde­pendence after a plebiscite this past January, and disengagement plans will be finalized by July.

This is a huge step in the region as the two ruling parties, the National Congress Party (NCP) and the former rebels, named the Su­dan People’s Liberation Movement (SPLM), have been fighting a bloody civil war on and off since Sudan gained independence from the Egyptians and the British in 1956.

There are obvious difficulties in the plan­ning and disengagement of a new country. One of the main issues that the current Suda­nese government has had to contend with is the question of oil control.

Most of the oil fields in Sudan lie in the south, however the refining and ex­port is done through pipelines that run to the north.

Infrastructure will also have to be reevalu­ated in both parts of the country. The army and the government have had to split up. For example, all Southern representatives to the parliament have been dismissed for the rest of the year.

Why does the South need independence? Besides the civil war that has been fought on and off for the better part of the last century, the northern and southern parts of Sudan are split upon religious lines, with the North more aligned with Arab nations and a Muslim population, and the south a more African and Christian population.

The south had anticipated independence back in 1955 when the British left the colony, as the British had ruled the country through two administrations, one for the north and one for the south. A war was fought from 1955 to 1972 relating to this issue, which ended in the Addis Ababa Agreement that ended the conflict for a while. Back and forth the conflict raged, until in 2005 the Nairobi Comprehensive Peace Agreement was signed which would grant Southern Sudan autonomy until a referendum could be passed, which is what happened this past January.

This good news in Sudan is not to be con­fused with the genocide in Darfur and issues with neighboring Chad.

The conflict in Darfur, deemed genocide in 2004, has to do with Western Sudan fight­ing against the Sudanese government (located in Khartoum, in the north). Though the gov­ernment does not admit to support­ing them, it is largely acknowledged that the Janjaweed militia is support­ed financially and militarily by the Sudanese government.

On the other hand, the rebels in Darfur operate two military groups, called the Sudan Liberation Army (SLA) and the Justice and Equality Movement (JEM).

The reason this conflict is deemed genocide is because the Janjaweed are mostly Muslim nomadic people, who are indiscriminately killing the non- Arab, farming minority in Darfur. This has led to over 300,000 deaths as well as over 2.7 million displaced peoples, many of whom end up in neighboring Chad.

This conflict has therefore spilled into Chad and created even more trouble for the people caught in between the fighting.

There is much to be done in aid­ing the innocent in this terrible con­flict, and if you would like to learn more, you can visit savedarfur.org. Even the smallest of actions can go a very long way.

The creation of Southern Sudan will truly be a test of autonomous will and will hopefully bring a level of security and stability to the re­gion, which has been lacking since the end of the colonial era.

We must not forget the conflict in Darfur, which rages on. Both conflicts are complicat­ed, and only time will tell if they will end with positive results.