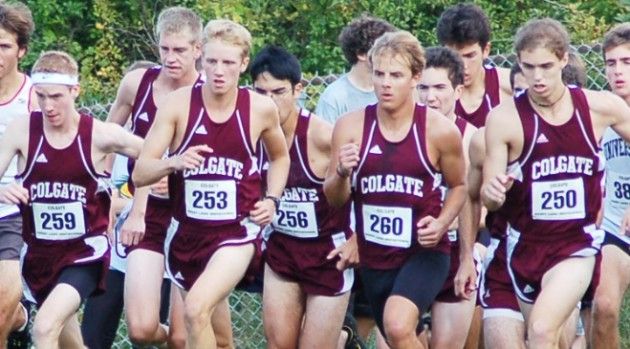 On Saturday, April 2, both the men’s and women’s track and field teams trav­eled down to Princeton, New Jersey to take part in the Sam Howell Invitation­al. Team scores were not recorded at the meet, yet several of the relay squads post­ed strong times at the annual event. Addi­tionally, numerous athletes shined on the individual stage, posting personal-bests and season-bests in a variety of events.

In the men’s portion of the meet, Col­gate got off to a particularly hot start in the middle distance events, with senior runner Jonathan Knowlton leading the way en route to a second place perfor­mance in the 800-meter run. Knowlton finished just behind first-place competi­tor David Ash of Navy, completing the event in a quick 1:53.89. Knowlton ran faster than Ash in seeding rounds of the event, but was barely edged out in the fi­nal heat. Colgate placed two more runners in the top-10 in the event, with senior Ed Boulat placing sixth and classmate Dan Gleason placing ninth. Boulat and Glea­son completed the races in 1:55.21 and 1:55.45, respectively.

In the long-distance events, the Raiders appeared to falter slightly as a whole, but sophomore Chris Johnson continued his strong campaign. Johnson came out of the gate strong in the seeding round, posting a time well under four minutes. He slipped down in the standings slightly in the final heat, placing 23rd, yet he still managed to post a very respectable time of 4:07.51.

‘Gate rounded out its solid performance with a strong showing in the 4×400-meter relay. Colgate’s ‘A’ squad of senior Andrew Smith, Knowlton, junior Tim Metivier and junior Graham Tooker used a quick start and smooth transitions on its way to posting a final time of 3:23.62. The squad placed fourth overall in the event, and ran the second-fastest qualifying time in their preliminary heat.

The women’s team echoed the perfor­mance of the men’s quad on Saturday, with several of the Patriot League’s top female athletes putting on strong displays at the Sam Howell Invitational. The Raid­ers’ weekend was headlined by the daz­zling performance of senior sprinter Mi­chele Miller. Miller began the meet in the 200-meter dash, where she posted a sea­son-best time of 25.81, good enough for sixth place. Miller followed with a similar performance in the 400-meter dash. The senior’s final time of 57.99 was another season best, as well as the fastest time run in the Patriot league so far this season. When asked what contributed to such a magnificent performance this weekend, the hard-working Miller simply replied, “Working hard at practice.”

Colgate finished the meet in impressive fashion in the 4×400-meter relay, plac­ing eighth out of 17 squads. The Raiders’ ‘A’ squad of junior Alexandra Atkinson, sophomore Amy Sleeper, first-year Jamie King-Prunty and Miller flew out of the gate and cruised through the finish line in a quick 4:05.20.

The women’s team will return to ac­tion on April 9, when they head to Cor­nell to compete against the Big Red and several other Patriot League foes. Miller noted that the team will be “working on handoffs and on speed endurance” in the coming week to prepare for the Cornell meet.

The men’s squad on the other hand, will have a weekend off before they return to action in a big way on April 15 and 16, when members of the team will travel down south to Knoxville, Tenn. to take part in the Sea Ray Relays.