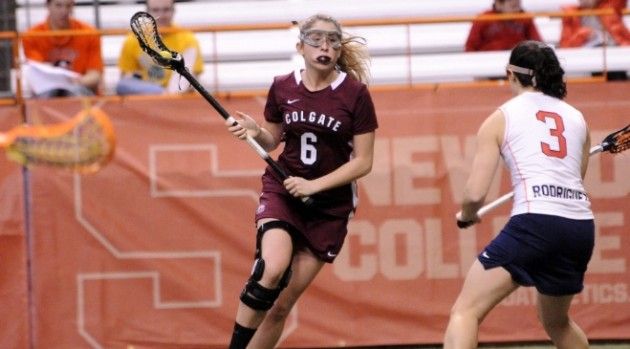 The Colgate women’s lacrosse team was defeated by Yale University this past Friday in New Haven, CT where they ended a three-game winning streak after the game came to a close with a final score of 10-7.

Colgate (6-5) was first to get on the scoreboard when Bubnack scored her 35th goal of the season at 26:31 in the first half. On the next draw control, almost ten min­utes after the tally, sophomore midfielder Quincey Spagnoletti gained possession of the ball and was able to dodge past three or four defenders before taking the ball all the way to the hole and regaining the lead at 2-1.

Yale bounced back again, tying up the match with 12:47 left in the frame. Miller scored her 23rd goal of the season with 6:21 left in play giving the game a one-point lead as the first half ended.

The three goals scored by Colgate in the first half were a season low for the team.

“Yale did a good job of keeping us off rhythm and not allowing us to get to the goal they way we have been accustomed to in the past – a credit to them and their game plan,” O’Sullivan explains. “We have some very good shooters and offensive play­ers, we just did not execute the way we are capable of. We will learn from this and be better prepared in the future for this type of situation.”

However, on a positive note, the team was able to hold back the Bulldog offense to a mere two goals before the end of the half.

“We played really well as a unit on the defensive end for the first half of the game,” senior midfielder Missy Guisti said. “Roa had some great saves and we all definitely feed off of her big plays. We had held our opponents to single digit goals in the past two games and were really fired up to keep that streak going.”

Yale came back out on the field fired up and ready to play, scoring twice in the first two minutes of play to earn the team’s first lead at 4-3. Colgate answered after O’Sullivan found the back of the net, tying the game at four. With a surge of determi­nation, Yale crushed the next 20 minutes of play and outscored the Raiders 6-0.

“They scored two quick goals to open the half and then we just weren’t possess­ing the ball like we should have been,” Guisti described. “We started getting desperate and eventually had to go into our high pressure defense which when it works, causes a lot of turnovers, but when it doesn’t, makes it easier for the attack to score because we are pulled out too far to collapse when someone gets beat.”

After a brief timeout called by the Raiders, Miller regained momentum and earned her second tally of the day with under two minutes left in play. Miller’s goal was a quick-stick assisted by Katie Sullivan. O’Sullivan slowed the bleeding, scoring her second goal of the game 30 seconds later to slow the bleeding. With just 42 seconds left in the game, Bubnack tallied her second point of the day on a free-position shot to bring the final score to 10-7.

A noticeable difference in team play is credited to the Raider’s lack of shooting. Colgate was outshot by the Bulldogs by a 24-19 margin.

“We need to continue to work on put­ting ourselves in position to be success­ful,” O’Sullivan explained when discuss­ing the lack of shots taken on Friday. “The important thing about shooting is that the shots should be of high quality. When you start forcing shots, generally, good things do not happen. We will just need to work harder to execute when we have good opportunities to go to goal.”

Colgate is scheduled to play next against Navy in its fourth Patriot League game of the season.

“We couldn’t be happier with the way we’ve been playing in the league,” Guisti said. “We try to take it one game at a time, but it has definitely been hard for us not to look ahead to Navy. They handed us two losses last season and that will defi­nitely be motivating us this week in prac­tice. I’m sure the coaches have scouted them thoroughly and we will be running their plays and defenses this week to pre­pare us for Saturday. It’s great knowing that we have complete control over where the tournament is held at this point. None of us want to be heading to Annapolis or Bethlehem in four weeks. If we keep winning, it will be here.”

And it seems as though the team is in good position to take the win.

“It is nice to be out in front, however the important thing for us that cannot be lost is not where you start but it is where you finish,” O’Sullivan announced in ref­erence to being number one seed in the current Patriot League Standings. “The Navy game will be a big challenge for us. We play at their place and they will be ready for us, as we will be equally ready for them. They are very well conditioned, well coached and deep in talent.”

Colgate will face Navy on their home turf in Annapolis, Md. on April 9.