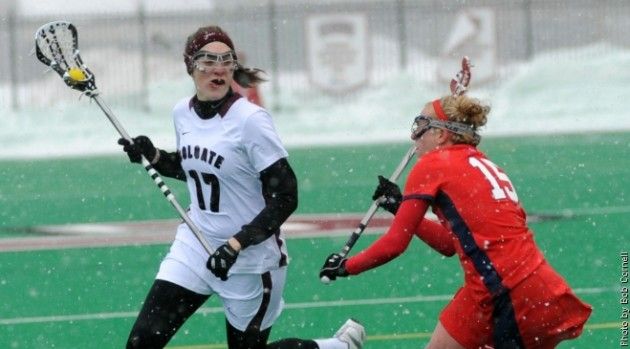 The Colgate women’s lacrosse team trav­eled to Annapolis, M.D. this past Saturday to face Navy in its fourth conference game of the season. The Raiders fell to the Midshipmen by a final score of 14-11, which marked their first Patriot League loss of the year.

The teams played evenly in the first nine minutes of the game. Bubnack and first-year midfielder Alison Flood were both able to find the back of the net. Colgate took a 2-1 lead over Navy before the hosts scored three unanswered goals to jump ahead with a 4-2 advantage over the Raiders. The Midshipmen would not give up their lead for the rest of the game.

First-year midfielder Monica White put Colgate back on the scoreboard with her 18th goal of the season. Navy answered back with two goals, widening its lead to a 5-3 advan­tage over the Raiders with fifteen minutes remaining in the first frame of play.

“We hurt ourselves,” Bergstrom said, re­flecting on the first half of play. “We made some really critical mistakes, turning the ball over for no reason. A true testament to that is the halftime score – we had beaten them on draw controls 12-2, but they were win­ning 8-5. We needed to settle down after each goal and take time off the clock possessing the ball.”

Junior attacker Katie Sullivan sliced the Midshipmen’s lead in half with a tally assisted by Miller; however, Navy quickly jumped back into action with three of the next four goals to take an 8-5 advantage over Colgate right at the end of the half.

At the opening of the second half, Navy continued to build momentum with three consecutive goals in the first six minutes of play. The Midshipmen’s 11-5 lead over Col­gate was the largest up to that point in the game. Colgate slowly began to chip away at the ever-widening gap on the scoreboard with goals from Miller and Bubnack, bringing the score to 11-7 with 20:45 left of play.

Navy fired back with three straight to wid­en its advantage to 14-7. Colgate attempted a comeback with four goals in the final 13 minutes of play. Bubnack and Bergstrom tal­lied two goals each, but this last stand was not enough to overcome the deficit.

The Raiders were outshot by their oppo­nents yet again, as the Midshipmen claimed a 32-28 shot advantage over ‘Gate. Colgate attackers were also unable to take advantage of free position shot opportunities. The Raid­ers received seven of these chances, but only Bubnack and Miller were able to capitalize on their opportunities.

On the defensive end, there was a fair fight for possession of the ball. Colgate crushed Navy on the draw with a total of 18 draw controls, compared to the Midshipmen’s mea­ger nine. Miller tallied six of the 18 controls for her team. On the ground, Navy was able to take its advantage with 18 out of the 31 ground balls. Junior goaltender Christina Roa had seven saves on the day.

“Its frustrating to lose to Navy – that is our third loss to them in a row,” Bergstrom explained. “We wanted to beat them so badly; but, from here on out, we need to focus on Lafayette and Lehigh. If we beat both of them then we put ourselves in decent position for hosting the Patriot League Tournament. If we take care of those two teams, it will come down to who wins in the Navy and Lehigh game. We’d love to host. It’s so much fun.”

Navy and Colgate are now in a three-way tie for first with Lehigh. With two games remaining in the season, Colgate players understand that it is time to step it up.

“We’re going to have a really focused week of practice while we prepare to play Lafay­ette,” Bergstom said. “This week in practice we are going to work on the basics, simple things that we were executing well in the first part of the season.”

The Raiders will take the field again this Saturday in a home match-up against Lafayette at 1 p.m. on Tyler’s field.