The Bell and the Seal 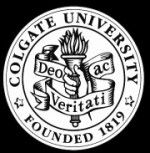 When you hear the Memorial Chapel bell ring 13 times at noon, or 6:30 p.m. or 10:00 p.m. on Sundays, it is a call to more than worship at University Church or Newman Mass. It is a reminder of the motto emblazoned on the Colgate seal:

Deo ac Veritati – God and Truth. Truth is, this place has quite a spiritual heritage.

I could talk about Miles Bronson (Class of 1836), at the forefront of missionary en­deavors by many Colgate alumni in Northeastern India – the subject of research by Pro­fessor John Carter. I could name-drop Harry Emerson Fosdick (Class of 1900), author of the Colgate hymn “God of Grace and God of Glory,” pastor of Riverside Church in New York City and perhaps one of the best know preachers of the first half of the 20th century. I could reminisce about my personal relationship with Fred B. Rhodes (Class of 1936), a descendant of one of the original 13, career Washington lawyer and co-founder with Chuck Colson (of Watergate infamy) of Prison Fellowship.

But I want to write about some of the students I encountered when I first came to the campus in early 1985.

Just before I moved to town permanently that May to plant Hamilton Bible Fellow­ship, I began to attend Colgate Christian Fellowship’s large group meetings. There, I met Eugene Robinson ’85, a senior eyeing a possible pick in the NFL draft. That didn’t happen, but he did sign as a free agent with the Seahawks.

A decade later he would play in back-to-back Super Bowls with Green Bay, winning one. A favorite interviewee and a vocal proponent of his faith, he is unfortunately remem­bered by some for a regrettable incident on the eve of his third consecutive Super Bowl, this time with Atlanta. He retired after one more season, and has spent his time quietly mentoring young athletes. Eugene currently coaches three sports at Charlotte Christian School in North Carolina.

Also in that group were Orlando and Maritza Crespo ’84, who married shortly after graduation. Both are career staff with InterVarsity Christian Fellowship, the international parachurch ministry with which the Colgate Christian Fellowship (CCF) is still affiliated. It’s rumored that some time into that career Orlando was offered the position of chaplain for the New York Mets. He declined that, so he could continue reaching out to university students. Maritza now serves on the NY-NJ regional staff; Orlando is the national director of LaFe, InterVarsity’s ministry to Latino students.

And there is Lou Markos ’86. He was the first Colgate student to attend our fledgling church; actually, he would attend only when he had stayed up the whole night before. For years he has taught at Houston Baptist University as Scholar in Residence and Robert H. Ray Chair in Humanities. He specializes in English Romantic poets, literary theory and classics. One of his passions is the work of C.S. Lewis. He has published Lewis Agonistes: How C. S. Lewis can Train us to Wrestle with the Modern and Post-Modern World, and Restoring Beauty: The Good, the True, and the Beautiful in the Writings of C. S. Lewis.

So, next time you hear that bell ring, remember the Colgate seal. And remember that this place has had, and continues to have, quite an influence in the spiritual lives of graduates.