The MAT Presents: A Night of Comedy 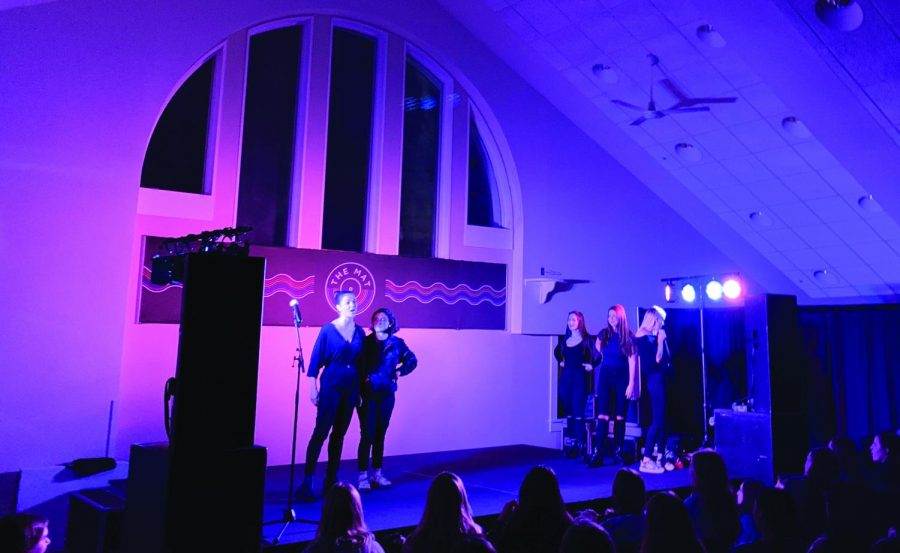 Students escaped the cold of Colgate’s first snowfall with The MAT’s Night of Comedy on Thursday, November 7. Charred Goosebeak, Colgate Stand Up and the Experimental Theater Company (ETC) teamed up for the first joint performance by all three of  Colgate’s comedy groups. Due to its popularity, this could potentially become a recurring event. All available seating was quickly filled so eager viewers either stood, perched themselves on tables or sat on the floor to enjoy the performances.

Each of the performing groups brought a different approach to comedy that all yielded waves of uproarious laughter. Charred Goosebeak is the only improvisational troupe on campus. Their performances are characterized by spontaneous, witty and tastefully inappropriate sketches. Colgate Stand Up is the sole stand up group on campus, which allows comedians to learn about themselves and comedy through regular performances. ETC entertains its viewers with a series of short sketches that are suggestive, relatable and always hilarious. In fact, sophomore Callie Schineller said, “I went to an ETC performance last year and it was hilarious. It made me want to come to this!”

Thursday night’s performances were arranged in a rotation. Colgate Stand Up started the show, followed by Experimental Theater and then Charred Goosebeak. The groups rotated three times to ensure a variety of performances.

The Colgate Stand Up performances allowed distinct personalities and senses of humor to shine through. They poked fun at themselves and at the quirks of Colgate, such as the pitfalls of hookup culture, the party scene and the alarming amounts of lead in the water.

ETC lined up a series of sketches depicting scenarios ranging from cheer tryouts that take an ominous turn, a woman choosing a date from a selection of uniquely strange suitors and the extremes that fraternities will go to keep freshmen boys out of parties.

The Charred Goosebeak performances were the only ones that involved audience participation. The performers instructed viewers to shout out the names of random household objects to serve as the basis of their improvisations. The comedians were able to take words as simple as “blender” and “socks” and come up with hilariously indecent one-liners. They also used words from the audience like “shots” and played around with the different meanings of the word to craft funny scenes about flu shots, the song “Shots,” the phrase “shooting your shot” and gunshots. The performances all provided a mix of relatable and taboo humor that resonated with the students in the audience and highlighted unifying, frustrating and amusing aspects of Colgate.

Although the groups’ performances were not very long given that the event was only an hour, the Night of Comedy was weeks in the making. The students spent several rehearsals brainstorming sketches, perfecting timing, memorizing scenes and honing their comedic skills. Even the improv scenes involved lengthy preparation that required the performers to be vulnerable and go outside their comfort zones.

Senior Lydia Culp of Charred Goosebeak discussed how the group prepared. “We play the same games but we never do the same scene twice. It’s scary when you first start doing it, and then it’s still kind of scary forever, but at the beginning it’s really bad.”

The time and dedication of these groups certainly paid off because the Night of Comedy successfully showcased the distinct comedic talents of each group to an impressively large audience. The fact that every student left smiling and laughing proves the success of the Night of Comedy, which is hopefully the first of many.