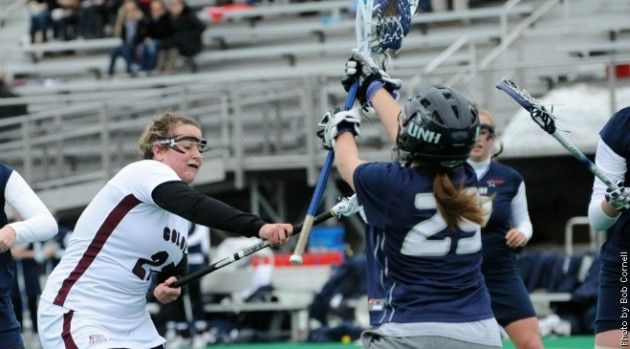 On Saturday, the Colgate women’s lacrosse team traveled to Worcester, Mass. to com­pete against Holy Cross in its third Patriot League match-up of the season. The Raid­ers earned a 12-8 victory over Holy Cross, continuing their undefeated run in the Patriot League.

“This season our team has had a focus on team unity,” sophomore defender Beasley Hays said. “We have really been focusing on play­ing as a unit and supporting each other both on and off the field. If one person is having a bad day the rest of the team is there to pick her up. Our mentality has been to play to our full potential and be the best team that we can be.”

Senior midfielder Colleen Bubnack extend­ed her goal-scoring streak to 17 games straight, with three goals and three assists. First-year midfielder Monica White posted her second hat trick of the season and was named Rookie of the Week by the Patriot League.

Attacker Kate Bergstrom returned to the lineup for her first game back from injury when she played on March 2 against Holy Cross. Bergstrom didn’t miss a beat and tallied two goals for the Raiders. She netted the first goal of the game just 1:24 into off an assist from first-year Ali Flood. The Crusaders answered, storm­ing out to a 4-2 lead with 16:32 left in the first half of play. Bubnack fought back with her 30th goal of the season, followed by an assist on the next goal shot by fellow teammate O’Sullivan. The game was tied up at 4-4.

Junior Katie Sullivan also scored a point to give the Raiders a 5-4 advantage with 13:17 re­maining in the first frame. In the last 10 min­utes of play for the half, both Colgate and Holy Cross found the back of the net, rounding the score to a 6-5 lead over the Crusaders.

Monica White came out to play in the second half, posting her first goal of the game just 53 seconds into the action off an assist by Courtney Miller. Holy Cross challenged with back-to-back goals tying up the match at 7-7.

The Raiders then swept the lead, scoring the next five goals to spread the gap to 12-7. Miller started the run with a point on a man-up play. White tallied two goals and junior Greer Goebels added a point to the score­board as well. Bubnack was a factor in three of the five goals with a goal of her own and an additional two assists. Holy Cross’ Kayla Dibari made a run at the score and was able to score with just ten seconds of play remain­ing; however, it was too late and the Raiders were able to close out the game with a 12-8 victory over Holy Cross.

Colate narrowly out-shot Holy Cross, tak­ing 24 shots against Holy Cross’ 22. The Raid­ers, however, were able to capitalize on their opportunities. Possession was tight as well, as Colgate won 11 of the 21 draw controls and only possessed 16 ground balls as opposed to Holy Cross’ 17.

On the defensive end, junior goalie Chris­tina Roa posted 10 saves, including seven game-changing stops in the second half. Eight of her saves were on free-position shots. The defense also posted 11 turnovers, their second high­est number of the season. Contributing to the point total were defenders junior Kailey Krause and sophomore Beasley Hays who each had two caused turnovers on the day.

“We worked hard on a new defense for Holy Cross – a ‘backer’ style defense that re­ally threw them off,” Krause explained. “The defense collectively did a great job causing turnovers and communicating together. And Beasley did an awesome job as a backer. As we keep playing this defense I think it’ll only get better and make us a greater threat against other teams.”

Colgate is the only team in the Patriot League to currently carrly a 3-0 record be­cause Navy did not play a conference game this past weekend. “This year we’ve had great team chemistry both on and off the field, and I think that it definitely contributes to our success, especially in league games,” Krause said. “The team is extremely focused on Patriot League games, with the end goal being to host and win the tournament. I think we all know that if we keep working hard and playing our game, no one will be able to beat us”.

The Raiders travel to Yale University on April 1. The game is slated to begin at 4:00 p.m.