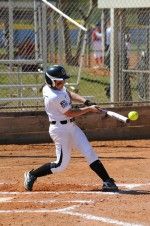 The women’s softball team traveled to Delaware this weekend to compete in the Sean Savage Memorial Tournament and faced Delaware State, the tournament’s host, and the State University of New York at Al­bany. Unfortunately, the team was unsuc­cessful in both match-ups and lost to Albany 0-1, and Delaware State 2-4.

In the first game, sophomore Courtney O’Connell pitched and only allowed one hit in her seven innings of service, but even this amazing run was not enough to prevent the Great Danes from scoring their only run. In the third inning, Albany’s Diane MacDow­ell found an open opportunity to advance to second base after Colgate notched a fielding error, pushing Adrianna Walraven to third. MacDowell then took third and finally took home on another Colgate error.

In game two, Colgate (8-11) got off to a great start, scoring two runs in the first inning off a single by first-year Haley Fleming that shot down the right field line to bring home sophomore Alana Dyson and junior Jennifer Ortega. Delaware State (14-8) quickly an­swered back in the bottom half of the inning when they tallied two runs. They then tallied a third in the second inning, which was fol­lowed by an insurance run in the fourth in­ning to secure the win for Delaware and mark the second Colgate loss of the weekend.

Colgate was slated to play Morgan State on Sunday to be followed by the consola­tion game of the Memorial Tournament, but both games were canceled due to weather conditions.

The Raiders will be back in action next weekend when they open Patriot League play with a couple of double-headers at Army. Their debut game is slated to begin at 1:00 p.m. on Saturday, April 2, at the Army Softball Complex.