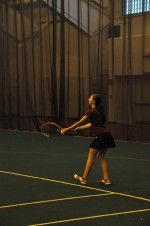 The women’s tennis team bounced back from its early season losses this week, win­ning two straight matches at Sanford Field House. First, the Raiders captured a tight match against Albany on Wednesday, ulti­mately edging the Great Danes 4-3. With confidence from their first win, the team continued on to sweep the Le Moyne Dol­phins in an impressive 7-0 shutout on Sat­urday. These victories put the Raiders at 2-4 for the season.

Colgate’s success Wednesday over Al­bany can be credited to the women’s strong play in clutch situations. After first-year Alex Petrini and junior captain Stephanie Brown dropped the first doubles match at No. one by a score of 8-4, the Raiders re­cuperated, winning the next two doubles matches to gain an important point. Senior captain Stephanie Bender teamed up with first-year Kelsey Shea to turn the tables on the Great Danes in a win at No. two match, 8-4. In need of one more doubles victory, first-year Becky Silvers and senior Jen Mar­quit came through big for the Raiders at No. three. The duo went to deuce on their final game and secured the victory on their second advantage when Albany hit it long.

With a 1-0 advantage, the Raiders en­tered single play with confidence and mo­mentum. Bender returned at the No. one spot, winning two straight matches 7-6 6-4. Petrini followed Bender’s lead, edging out Albany’s Laine Mackey 6-4, 6-2. De­spite the Raiders’ early success in singles, they took the next three losses, putting them at a nail-biting tied score. Brown and Marquit both lost in two sets, while Shea dropped her first set, captured her second and ultimately lost the singles point, falling in the final set 6-4. It was Becky Silvers at the No. six spot who came through in the clutch for the Raiders, 6-2, 6-2, solidifying the Raider’s first win of the season.

“I am so proud of the attitude and spirit of the ladies.” Head Coach Bobby Penning­ton stated. “Tonight’s win was huge for our confidence after losing back-to-back 4-3 heartbreakers coming into today.”

After Wednesday’s tight match, the Raiders regrouped for its second match of the week versus the Le Moyne Dolphins. With newfound confidence, the women steamrolled their foe in a 7-0 shutout. First, Colgate secured the doubles point, taking down Le Moyne in all three matches. The pair of Petrini and Brown bounced back from a doubles loss Wednesday, taking the match 8-1. Bender and Shea secured their second victory of the week, 8-2, while Mar­quit and Silvers continued their doubles success, taking the No. three set 8-1.

In singles play, the women continued their dominance and did not drop a set. Petrini had the toughest match of the day, but ultimately came out on top 7-5, 6-1 over Le Moyne’s Caroline Tisdale. Shea fol­lowed suit, winning at No. two 6-0, 6-2. Brown and Marquit at No. three and No. four both took down their opponents, win­ning straight sets 6-0, not once giving up a game. Silvers returned to action, only giving up one point at No. five in a two set victory 6-1, 6-0. Finally, senior Alexi Aberant secured the final singles point for the Raiders at No. six without giving up a single game.

The women look to extend their win­ning streak March 5 at Sanford Field House, where they will be hosting the Si­ena Lil’ Saints. With confidence from two straight victories, the Raiders are poised for success.