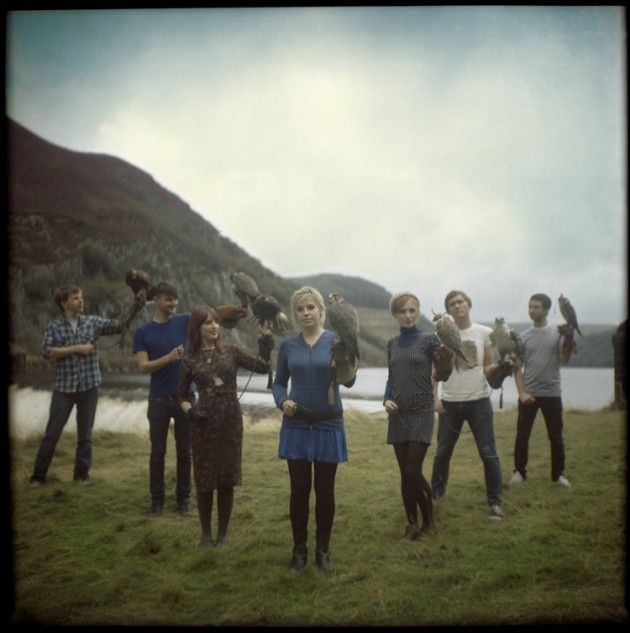 For anyone who has grown tired of the clicking, the vocal manipulation and the incessant looping – the dubstep influence, I mean – that is currently infecting indie music, I have the antidote. Yes, ladies and gentlemen, if you seek an indie band that can be considered original and not garner any comparisons to the dubstep-inspired garbage currently all the rage, I present to you Los Campesinos!

Los Campesinos! – and yes, that exclamation point is officially in the band’s name – formed at some university in the UK, all changed their last names to Campesino!, and chose a Spanish name despite the fact that none of them are Spanish. Against these clear indications that this band must be pretentious beyond the point of listen-ability, they are actu­ally one of the most accessible and catchy bands writing songs today.

Their early music, an EP and their first al­bum, Hold On Now, Youngster…, sound like Belle & Sebastian turned up to 11 with Ian Curtis (of Joy Division) writing the lyrics. These songs are catchy to the extent that should be il­legal for the high level of potential addiction. To put their first album on in the background is to be entertained by the giddy energy of the male/female vocals, catchy guitar lines and choruses that will stay in your head. However, to put on headphones and analyze the lyrics is to discover some impressive, if not slightly melodramatic, poetry. The lyrics are so sincere and heartfelt that they occasionally toe the line of over-dramatic, but with the way that the words so perfectly fuse with the music, one can find no fault. Overall, this album is for anyone who loved the Juno soundtrack but always wished it was a little bit louder.

The turning point of this band is to be found on their second release, 30-minute mini-album titled We Are Beautiful, We Are Doomed. The outward giddiness of their debut album seems to remain, but upon further listens, there is a darkness to be found. The lyrics feature imagery of pain and sickness filtered through the jubilant coed vocals in such a way that a perfect balance is struck. There is frustration and despair in the words, but the feeling is still very happy and excited. While it might seem that these sentiments would create a distracting clash in tone, it is the balance of the two that reveals the brilliance of this band.

Los Campesinos! latest album, Romance is Boring, is certainly their best and is one of the most under-appreciated releases in recent years. This band has proven that they are capable of writing songs that won’t leave your head for days, but have matured to strive for something greater than catchiness. These songs don’t follow the normal verse-chorus-verse pattern of the pop music they so clearly love, but instead favor a freer, more post-rock-influenced structure. These songs are still in the pop music range length-wise, but they build their songs intricately, paying attention to the effects of structure and song design on the listener. This album is more abrasive, using more distorted guitars and feedback, but the hooks are memorable enough that they will still stick with the listener. The complexity of this album far exceeds any of their previous work and stands as a testament of original music in the indie world without the use of electronics or vocal manipulation.

If you are looking for a new band, I can’t recommend Los Campesinos! enough. I have been lucky enough to see this band live, and I will attest to the fact that their shows are equally as exciting as their albums. As much as I do like to keep my own music secrets, Los Campesinos! are too good to be kept to myself. Check them out. I bet you won’t regret it.