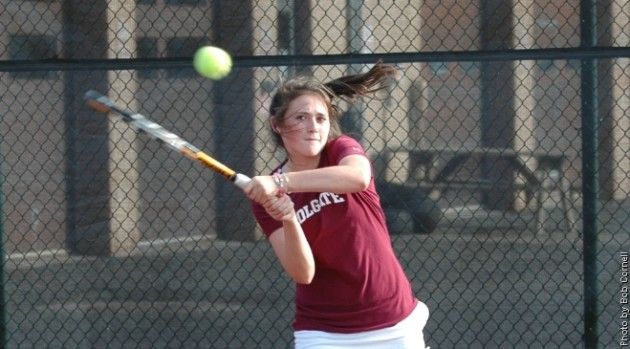 Despite escaping the wintry weather of Hamilton, New York, the Colgate’s men’s and women’s tennis squads were defeated in a string of difficult matches in Orlando, Florida over Spring Break last week. On the women’s side, the Raiders suffered a 7-0 loss to Liberty on Monday and were unable to bounce back from the blow, dropping Tuesday and Thursday matches, 6-1 versus Wayne State and 7-0 to Washington University of St. Louis. The men faltered as well, dropping their first match 7-0 against Liberty on Monday and falling to the New Jersey Institute of Technology and Fair­leigh Dickinson on Tuesday and Thursday, re­spectively, in two tight 4-3 matches. This gives the women a 3-8 and the men a 4-8 overall re­cord this season. Despite the losses, the spring trip proved to be an important learning experi­ence for the Raiders as they prepare for Patriot League play in the upcoming weeks.

The women kicked things off in Orlando on Monday in their first match against Liberty University. In doubles, the Raiders were unable to secure the important point, as the women were defeated in all three matches. First, rook­ie Alex Petrini and junior captain Stephanie Brown fell to the Liberty first-year pair of Cam­eron Richard and Rebekah Jenkins 8-4. Senior captain Stephanie Bender and first-year Kelsey Shea followed with an 8-1 loss and Becky Sil­vers and Jen Marquit suffered a rare blow in an 8-4 defeat.

The Raiders returned with hope to secure the much-needed singles victories, but were unable to hold off the strong Liberty team in a series of losses. In the No. 1 spot, Bender was defeated 0-6, 1-6 while teammate Petrini also lost in two sets, 2-6, 1-6 at No. 2. Shea and Brown also lost in two, while Marquit and Silvers struggled at No. 5 and 6, dropping the last two matches and succumbing to Liberty in a 7-0 defeat.

On Tuesday, the Raiders returned to action, hoping to fare better versus Washington Uni­versity of St. Louis. Despite their hard fought matches, the women were unable to overcome the previous day’s blow, dropping their second tilt, 7-0. In doubles, the Raiders lost all three matches, Brown and Petrini falling 8-3, Shea and Bender 8-1 and Silvers and Marquit far­ing a bit better, losing a close 8-5 match versus the Bears’ team of Theresa Petraskova and Elise Sambol. The Raiders continued the fight in sin­gles, but fell short, losing all six matches. Petrini played the closest match, but came up short fall­ing to Washington’s Natalie Tingir 5-7 and again 0-6 in the second set.

The Raiders were unable to bounce back from their first two spring break losses and suf­fered their third defeat of the trip on Thursday after succumbing to Wayne State 6-1. Colgate could not secure the doubles point, despite Shea and Bender’s decisive 9-7 victory at No. 2. The duo put up a hard fight, but its lone win was insufficient to gain the key point. Coming back in singles, the women dropped the first three matches, until Brown won her first set 7-5 over Wayne State’s McCall Monte. Unfortunately, Brown was unable to maintain momentum, losing the next two sets by 2-6 and 1-6. Silvers secured the lone win for the Raiders, winning in straight sets at No. 6 by 6-4, 6-4.

The men’s squad joined the women’s team in Orlando, but was also unable to secure a victory despite impressive play. The Raiders were first bested by Liberty on Monday in a 7-0 sweep. With the doubles point on the line, the men experienced three straight defeats, falling 8-4 in every match. Bouncing back for singles play, the men were unable to secure a single victory, despite their tough play. First-year Luke Gens­burg put up the best fight at No. 1, losing a close second set 6-7 to Liberty’s Siim Tuus.

A day later the men returned to the courts against the New Jersey Institute of Technology. Colgate looked great in doubles, picking up the doubles point after securing two straight victo­ries at No. 1 and 2. First, the senior captain duo of Ruslan Goussiatnikov and Phil Bernasek de­feated the Flames’ pair of Kiro and Cederqvist with a convincing 8-3 victory. Gensburg and junior Sean Spellberg followed suit, capturing the match by the same score. Despite the key doubles point, the Raiders suffered in singles play, ultimately losing the match by a single point. Colgate managed to claim two wins, as Bernasek continued his impressive play, winning in three sets 6-3, 6-7, 6-1. Spellberg also won his second match of the day at No. 6 in a deci­sive 6-3, 6-1 victory. Despite the outcome, the Raiders put up a strong fight, losing several close singles matches in tight three-game sets.

The men returned to action on Thursday, taking on the Fairleigh Dickinson Knights in their final match of the week. The Raiders con­tinued to stake their ground in doubles play, se­curing the important point after Bernesak and Goussiatnikov bested their foes in a close 9-7 win. Gensberg and Spellberg proved their team’s strength at No. 2, defeating the FDU duo 8-6 in their second victory of the trip. Unfortunately, the Raiders experienced the same crushing sin­gles losses, unable to capture enough victories to outdo the Knights. Gensberg kicked things off at No. 1, defeating Dominic Hemy in two games, 6-0, 7-5. Despite a close first set, sopho­more Alec Goldstein was unable to hold off his opponent, dropping the match in straights: 6-7, 2-6. First-year Bobby Berkowitz fared well, win­ning in just two sets in a decisive 6-3, 6-4 vic­tory, giving the Raiders their last singles point. And while Goussiatnikov and Spellberg put up a strong fight for the squad, they were unable to outdo their foes, losing in a heartbreaking three-game set.

In spite of the teams’ losses this spring break, they were able to gain the necessary prepara­tion for upcoming Patriot League matches as the weather turns this season. Both squads will face Navy when they return to action this week, hoping to use their experience to kick off inter-league play. Both teams will travel on Saturday March 26 to Annapolis, MD to face the Mids and then to Fairfax, VA to face George Ma­son. The start times for all matches are yet to be determined.