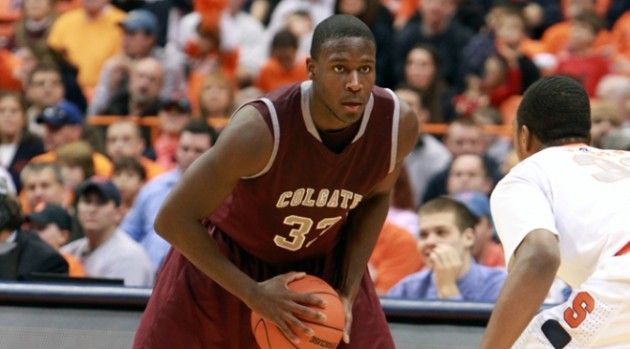 With just two games remaining in their sea­son, the Colgate men’s basketball team could not close on a high note.

The Raiders (7-21, 4-9) dropped their final two regular season contests this past week against Holy Cross (7-20, 6-7) and Navy (11-19, 6-8), dropping them into seventh place in the Patriot League. ‘Gate stayed close and made a comeback against Holy Cross, but eventually fell 77–75. Then, they were outplayed in the second half against Navy, losing 75–55.

In the first game, Holy Cross was led by An­drew Keister who posted 16 points and 12 boards. Guard Devin Brown poured in 16 points for the Crusaders while collecting six boards and holding down the paint as the Raiders lost by just two.

The Raider attack was led by junior forward Yaw Gyawu, who tallied 15 points, and sopho­more guard Mitch Rolls who added 14 with seven assists.

Colgate got off to a solid start in the game, trading baskets through the first few minutes, but Holy Cross went on a big run. The Crusad­ers soon went up 26-17 as the team put together an 18–7 run but ‘Gate stormed back. The Raid­ers went on a 16-8 run of their own to close the gap to just three at the half. Junior forward Nick Pascale had 10 points and six rebounds in the first quarter for the Raiders as Gyawu added seven.

Holy Cross came out of the locker room with determination, ending the Raiders’ run before scoring six straight and claiming a 58-47 lead with a little under nine minutes left. The Crusad­ers pushed the lead all the way to 12 before the comeback kicked into gear. From there, Colgate went on a 16-7 run, making the score 75–72 with just 16 seconds remaining.

After securing the ball, junior guard Mike Venezia hit a three-pointer with 5.5 seconds left to tie the game. However, with just 1.6 seconds left, Brown drove the length of the floor and was fouled. The guard calmly knocked down two free throws to seal a Holy Cross Victory at Cotterell Court.

Next, ‘Gate headed off to Annapolis, Md. on Saturday to try their luck against the Midship­men of the U.S. Naval Academy. Though they had narrowly missed victory in their previous game, the result was just the same for the Raiders.

Jordan Sugars led all scorers with 25 points as Navy bested Colgate 75–55. J.J. Avila and Greg Brown notched 12 points each to pace the Midshipmen.

In this game, the Raiders never led as Navy jumped out on a 11-0 run and never looked back. When the lead was pushed to 15, ‘Gate finally responded with a 12-0 run of their own. The Midshipmen recovered, however, taking a 31-24 advantage into halftime.

Colgate lacked fire coming out of the locker room in the second half, cutting the lead to five before allowing Navy to go on a 6-0 run from which they never returned. The deficit for ‘Gate quickly became 11 with around 15 minutes to play. To the Raiders’ credit, they kept it close and and got the lead down to eight but the comeback fell short as the Midshipmen pushed it to 25 following a ridiculous 30-13 run.

The Raiders were a decent 17–for–23 from the free throw line, but ‘Gate could not prevent its third–straight loss to end the regular season. They also went just 4-16 from downtown, not nearly enough against the 39 percent clip of the Midshipmen. Considering they lost to Navy by just three on January 29, this was certainly a disappointing finish.

With their defeat, Colgate finished seventh in league play and will face No. 2 American Univer­sity in the Patriot League quarterfinals at Bender Arena on Wednesday in Washington, D.C.. Navy, who finished in fifth, will play at Lehigh as they vie for a spot in the semis.