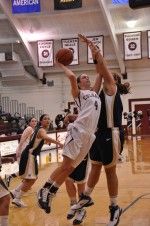 In the final weekend of Patriot League play, the Colgate women’s basketball team lost both of its match ups, but will still be able to compete next week in the playoffs. Last Wednesday, the team topped Holy Cross 74-59 despite junior Kelly Korkowski’s heavy contributions to the team both offensively and defensively as she posted her season pre­mier double-double with 10 points and 10 rebounds for the competition. The follow­ing Saturday, the team was unable to defend against Navy on its own home court, and lost 75-59 to the Mids.

In Wednesday night’s game, the Raid­ers felt a considerable amount of pressure to pick up the level of play after recording five consecutive losses against Patriot League op­ponents. Indeed, this sense of urgency would prove to be too much for Colgate to shoul­der, and, despite hitting the scoreboard be­fore the Crusaders, was not able to come up on top. After securing a small but hopeful three-point lead in the first minutes of the half, the Raiders did not do much to prevent Holy Cross from evening the score.

The Crusaders turned the tables and, within two minutes, had taken a 7-5 advan­tage for themselves. Soon, the margin be­tween the teams widened to 10 points, and by the end of the half the Crusaders had se­cured a 39-30 lead over the Raiders even after Colgate had begun to pick up the pace both offensively and defensively.

After being dominated in the first half, the Raiders came back in the second half with a clear goal to get even with their Holy Cross opponents. Unfortunately, will was not the way and the Crusaders were able to match almost every Colgate basket with one of their own. They were determined to keep the lead, and by the 9:25 mark, Holy Cross had climbed to a 63-49 lead. At that point, the Raiders successfully prevented any further points for Holy Cross, but were not able to score any of their own. After the brief dry spell, both teams started to get aggressive and the score climbed to 74-59 in the last moments of the game.

“For the second game in a row, we had a positive assist-turnover ratio,” head coach Pamela Bass said. We struggled from behind the arc on some key penetrate and pitch op­portunities, which could have made a major difference. In the first half we gave up too many offensive boards to Holy Cross and they converted. Although we improved in the second half, we could not convert on key possessions. Kelly did a great job holding the leading player in the conference (Whitney Fremeau) to just 11 points and two boards.”

After the loss against the Crusaders, the Colgate team traveled home to honor their seniors in their final game at Cotterell Court against the Mids. Unfortunately, the team’s appreciation for their dedicated seniors was not enough to bring home the win, and the team fell to Navy. Senior Krista Moser con­tributed 12 points and six rebounds, while Kozlowski led the team with 14 points and three assists. Junior Kelly Korkowski led the team in rebounds with 11 by the end of the tilt.

Playing in line with their trends this season, Colgate got on the board first, but the Mids quickly responded and took the lead. The two teams battled it out, trading possessions and baskets after both struggled to make any baskets at all. The game was tied 13-13 at the 9:25 mark. Just moments later, however, the Mids began a long behind-the-arc campaign involving both teams, and the score shot to 34-32 by the end of the half, with Navy in the lead.

Colgate was not willing to let their se­niors go down without a fight, and they quickly evened the score in the opening shot of the second half. This time, Colgate ran with the confidence boost and went on a 6-0 run over the Mids. The two teams traded the advantage after that initial burst, and the Raiders came out on top with a score of 62-52 with less than four minutes left in the game. After a rough few weeks, it seemed as though Colgate would be able to end their regular season play with a win. Unfortunately, it was the Mids that were able to come out on top with a final score of 75- 59 and the first spot going into the Patriot League playoffs.

“It was a good test before the Patriot League tournament,” stated head coach Pamela Bass. “We will build on the positives, make some adjustments, and look forward to seeing them again next week in the tournament.”

The Raiders will resume play next week­end when they travel to Annapolis, Md. as the No. 8 seed for a matchup against No. 1 seed Navy in the first round of the 2010-11 Patriot League tournament. The game is scheduled to take place on Saturday, March 5 with a 7 p.m. tip-off.