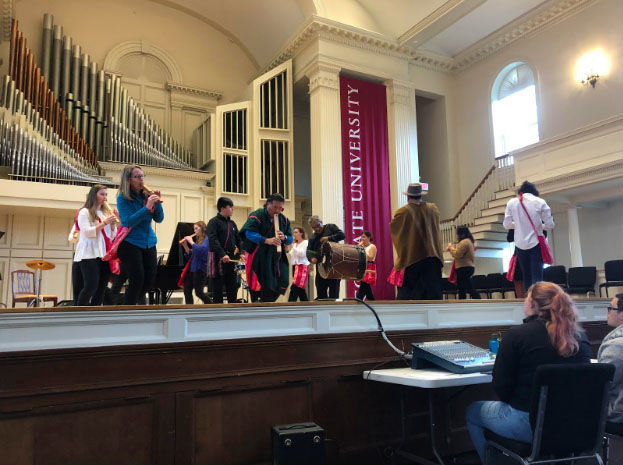 On Friday, November 1, the Bolivian music group, Música de Maestros, concluded their two-week residency at Colgate with an ardent performance in Colgate’s chapel.

Música de Maestros taught in conjuction with ALST 204: Performing Bolivian Music, which instructed students on how to play traditional Bolivian instruments like the tarka and siku—two instruments used in the music of Bolivia’s indigenous, Afro-Bolivian and LGBTQ populations.

The concert began with Música de Maestros playing three songs without ALST 204 students. The first song began lightheartedly, featuring the violin and the recorder, accompanied by drums, guitar, piano and clarinet. As the song continued, it took an impassioned turn. The quena, a high-pitched, resonating wind-instrument, sang out as though it were human, begging for its fervor to be heard by the audience.

After Música de Maestros’ solo performance, the students of ALST 204 joined them onstage, playing the tarka and siku.

The tarka, a Bolivian wind instrument that is  traditionally played during Carnival, is thought to awaken the heart of the people, as noted by ALST 204 student presenters. This proved to be true as the students and band-members enacted the communal aspect of Bolivian musical performance by circling the drummers in unison while playing the tarka.

The siku—a Bolivian wind instrument that is historically played during communal, inter-group music competitions of the Bolivian dry season—was paired with soulful singing in Spanish.

“Bringing everybody into the sort of communal discussion of music…the genres we were playing in the middle of the stage…it’s a community aspect of playing and anyone can come to that and share,” said Bigenho.

Following the joint performance, Música de Maestros presented their own interpretation of two Argentine songs. Unlike the traditional Bolivian tunes heard earlier in the concert, the beat of these songs was carried by the guitar while the pianist sang. In this intimate performance, each word uttered by the musician felt more personal than the last—his rich voice commanding the attention of each audience member.

As the singer bowed, the students of ALST 204 once again took the stage with Música de Maestros. This time, they played Saya music, a Bolivian musical genre that guided the Afro-Bolivian ethnic minority group in its fight for visibility and national recognition. The rhythmic drumming accompanied by the unified voices of Música de Maestros and students made for an unforgettable, powerful performance.

The concert closed with a song meant to describe the joys of Carnival. The energetic performance on the tarka in combination with animated singing and dancing was an obvious crowd-pleaser. The communal aspect of Bolivian music was now enacted by the audience with their rhythmic claps in time with the music, blurring the dichotomy between the performer and observer.

As the final, high-pitched note of the tarka pierced through the chapel, one thing was certain—the unifying power of music is undeniable, even when a community may feel more divided than ever before.