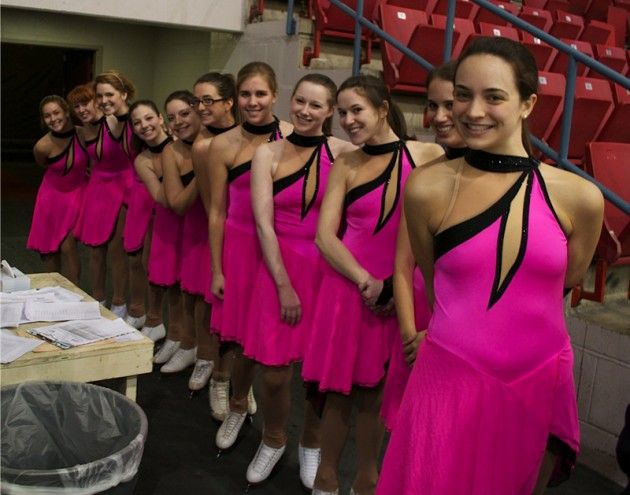 On February 12, Lake Placid was packed with figure skaters competing at the 2011 Eastern Synchronized Team Skating Sec­tional Championships. Only three months ago, Colgate University and Hamilton College combined forces to create a joint synchronized skating team. Despite their lack of experience in the field, the girls pre­sented one of their best performances, skat­ing to Lady Gaga’s “Dance in the Dark.” The judges responded to their performance and ranked the team fifth out of 11 East Coast colleges. The Colgate and Hamil­ton team was pleased to beat more expe­rienced teams from Vassar College, Syra­cuse University and Princeton University. While there, the team also had the honor of staying at the Olympic Training Center, alongside skiers, lugers and bobsledders.

The team was founded this past fall, when Colgate Figure Skating Club Presi­dent senior Elise Aronson reached out to Hamilton College in the hopes of ex­panding their respective skating programs. Coach Anne-Marie Lemal Brown and se­nior Melissa Lehman, a former member of the national champion synchronized team, helped guide the team to success, through their work with coaching and choreogra­phy, respectively. Colgate team members also include the Colgate Figure Skating Club’s co-vice presidents sophomore Em­ily Miller and classmate Courtney Mills, as well as sophomore Maggie Dunne, first-year Regan Esposito and sophomore Hallie Kohler. Ultimately, the girls’ camaraderie, enthusiasm and diverse skating back­grounds helped the team perform well. The team has great potential, as is evi­denced by the progress made in a matter of months and they hope to continue this with success at future competitions.

The Colgate Figure Skating team com­peted again on February 19 at the Uni­versity of Delaware against Cornell Uni­versity, Dartmouth College and six other schools. Aronson, Mills, Esposito, and first-year Arielle Sperling competed indi­vidually to collect points for Colgate. The team hopes to improve upon their fifth place ranking from last year.