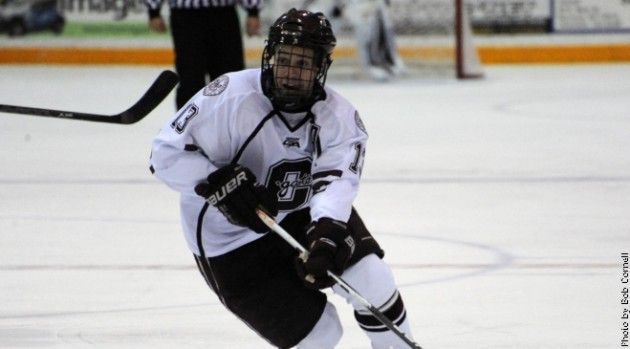 Last weekend, the Colgate men’s hock­ey team capped off its regular season with a 1-1 tie against the third-ranked Yale Bulldogs on Friday and a 6-4 loss to the Brown Bears. Junior forward Austin Mayer scored his third goal of the year in the tie against Yale, while first-year forward Chris Wagner increased his point streak to three games with an assist. First-year goaltender Eric Mihalik stopped 39 of 40 shots to preserve the tie, including 22 in the third period and overtime. On Saturday, senior assistant captain Francois Brisebois posted his third multi-point game of the last seven ,with a goal and an assist. The Raiders will enter the postseason riding a 4-2-1 run in their last seven games.

“You always want to make sure you are peaking at the right time and it has been a real confidence booster for us to have a strong end to the season,” senior captain Brian Day said. “We have finally started to get some of the bounces that we have needed and we feel like we are playing our best hockey at this moment.”

As expected, Friday’s contest was elec­trifying from start to finish. The Bulldogs entered the game with a perfect 14-0 record at home this campaign and in the midst of a battle for first place, while Colgate was coming off a weekend sweep of Har­vard and Dartmouth. In the first period, both teams created several grade-A scoring chances, but both Mihalik and Yale’s Ryan Rondeau stood tall and stopped every shot they faced, as the Bulldogs outshot the Raiders 11-10.

The second period saw the only two goals of the game. Yale put pressure on Colgate’s offensive zone early on and was able to capitalize on a turnover at the 7:32 mark when Andrew Miller put the puck past Mihalik. Trailing 1-0, the Raiders took momentum from the Bulldogs and proceeded to control the play throughout the rest of the period. Colgate’s efforts were finally rewarded at 16:32 when May­er put the biscuit past Rondeau off of help­ers from Wagner and sophomore forward Robbie Bourdon. With the assist, Bourdon kept his four-game point streak against Yale alive.

The Raiders were forced to kill a pen­alty early in the final frame, but once that was done, they picked up right where they left off and kept pressure on the Bulldogs’ offensive zone. Untimely yet question­able penalties at 8:41 and 11:55, however, forced Colgate to kill Yale’s power plays and shifted momentum to the Bulldogs’ side. Late in the period, however, the Raid­ers produced some golden scoring oppor­tunities that were frustrated each time by Rondeau. Mihalik would not be outdone and came up with several crucial saves in the waning seconds of regulation.

Yale controlled play in the extra ses­sion, outshooting Colgate 4-1, forcing Mihalik to make several incredible stops to preserve the tie. That included a one-on-one situation against Hobey Baker candidate Denny Kearney. The Bulldogs entered the game averaging 4.41 goals per game and boasting the nation’s fifth best man advantage. The Raiders were also the only squad to steal a point from Yale this season at home, and the only team that remains unbeaten at the Bulldogs’ Ingalls Rink throughout the past three campaigns.

“Mihalik has been playing some great hockey lately and has been a big part of our recent success,” Day said. “Our pen­alty killing has improved as the season has gone, which has enabled us to shut down some dangerous power play units.”

The following evening, Colgate entered its game against Brown with its fate as the twelfth seed in the ECAC Hockey Tourna­ment decided. That may have played into the lower level of intensity with which the Raiders played, and which allowed the Bears to control play for most of the match. Brown drew first blood at 7:41 when Mike Wolff put the puck past Miha­lik. Colgate drew even less than three min­utes later on a five-on-three man advan­tage when Brisebois fired the puck past the Bears’ Mike Clemente, assisted by junior forward Austin Smith and senior assistant captain Wade Poplawski. It took less than two minutes for the hosts to regain the ad­vantage, as Jesse Fratkin scored at 12:47. Despite leading in shots 11-8, the Raiders trailed 2-1 after 20 minutes of play.

Colgate was called for a penalty 1:24 into the second stanza and it took Brown less than a minute to capitalize on its power play, as Harry Zolnierczyk gave his team a two-goal lead at 2:12. The Raid­ers pulled within one at 13:33 after a great collective play. First-year forward Jack Mc­Namara gained the puck along the boards and fed it to fellow classmate and forward Mike McCann, who fired it at Clemente. Junior forward Mark Nasca caught the re­bound in mid-air and smacked it into the net. Once again, however, the Bears were able to score soon after, this time less than a minute later at 14:32 to take a 4-2 lead into the final 20 minutes.

Sophomore defenseman Jeremy Price gave Colgate hope after scoring 37 seconds into the final frame, assisted by Brisebois. It did not take long, however, for Brown to regain its two-goal lead, as Jarred Smith scored at 2:06. A man advantage tally at 6:11 from junior assistant captain Kevin McNamara, who was assisted by sopho­more defenseman Thomas Larkin and Bourdon gave the Raiders hope of getting a point out of this game. Despite pepper­ing Clemente with shots throughout the period, Colgate was unable to score again. The Bears sealed their victory with Smith’s second goal at 18:12. This contest was a roller coaster from start to finish, as ev­ery time that the Raiders scored, Brown answered soon after. If Colgate wants to make a run into the playoffs, it will have to buckle down and prevent teams from answering goals with tallies of their own.

This upcoming weekend the Raiders will travel to Rensselaer for the first round of the ECAC Hockey playoffs. The two teams split the season series, with the En­gineers winning 2-1 in Hamilton and Col­gate taking a decision in Troy by the same score. Both games went to the extra session.

“We need to continue to play a high energy game,” Day said. “We can frustrate teams when we play like we’ve been play­ing and I really like the way we match up against RPI.”

Each contest this weekend is set for a 7 p.m. start.