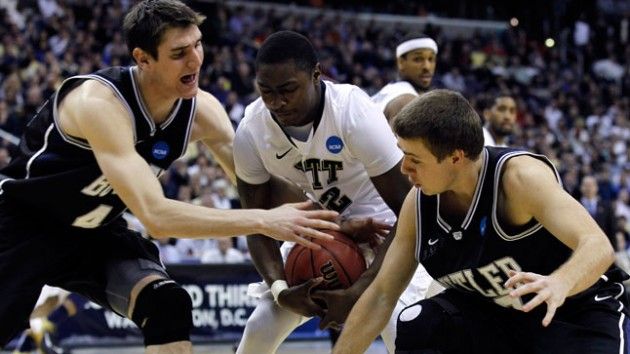 Despite the fact that I was found run­ning around a neighbor’s backyard early Sunday morning guarding invisible basket­ball players and diving around for imagi­nary loose balls while repeating the words “The Madness, The Madness” over and over again, I have to say I’ve quite enjoyed the shear insanity that has been March Mad­ness so far. Well, at least I made it out of the weekend relatively unscathed (although I can’t say the same about my bracket).

In fact, the first three rounds of the this year’s tournament have provided us with a little of everything: exciting fin­ishes, big time upsets, great individual performances and of course the handful of truly epic one-liners by legendary an­nouncer Gus Johnson (see George Mason vs. Villanova ending). This year’s tourney has also included more than your fair share of boneheaded plays by not only players, but also coaches and officials. So, with the field of 16 all locked in and prepping for Thursday’s and Friday’s games, let’s take a quick look back at what we’ve learned (and what we were reminded we already knew) so far from this year’s tournament of Madness.

1. The Big East had us all fooled for exactly 15 minutes and then went back to being the most overrated conference in the country.

After going a respectable 7-4 in the sec­ond round, and looking like it might have a few contenders to make it to the Elite Eight or even the Final Four, the Big Least lived up to its name in the third round and did what it does best at this time of the year: flop. Pittsburgh was upset by Butler in one of the worst endings to a basketball game ever witnessed by man, West Virginia couldn’t keep up with Kentucky, Notre Dame got absolutely dominated by Florida State and number three seed Syracuse fell to a pretty mediocre 11-seeded Marquette. After only two “real” rounds, out of the 11 teams selected for the tournament, only two Big East teams are left, and both are underdogs to make it to the Elite Eight (se­rious underdogs in Marquette’s case).

How about this? Next year, come se­lection time in college basketball, can all please promise to not let 10-plus Big East teams in the tournament, no matter how tough and gritty and awesome the con­ference looks? The more I think about it, the more I think it’s absolutely insane that St. John’s was a No. 6 seed. As well as they played in certain stretches this year, there was no way they were going to beat a team like Gonzaga, or any number of the other 8, 9 and 10-seeds in this year’s tournament for that matter. You could even make the argument that Syracuse was over-seeded, considering the fact that the only ranked non-Big East team they beat this season was a pretty mediocre Michigan State team.

The bottom line is that the Big East gets so much hype because for some reason, they start the year with ten teams ranked in the Top-25, and therefore all end up having a bunch of wins against ranked opponents (i.e. each other). When an unranked team like Florida State goes out and absolutely dominates the supposed fifth-best team in the nation and cream of the crop of the Big East in Notre Dame, something is clearly wrong. That being said, the Big East will definitely bounce back next year and have thirteen teams in the tournament.

2. Some of the officiating so far as been nothing short of brutal.

The “five-second” call at the end of last Sunday night’s Arizona-Texas game was one of the worst and most blatant make-up calls I have ever seen in my life. Clearly, the referee felt bad for not calling what looked like an obvious foul against Texas on Arizo­na forward Derrick Williams a few seconds earlier and therefore did everything in his power to give the ball back to Arizona.

And I’m not even going to get into Sat­urday’s Pittsburgh-Butler ending. It made absolutely no sense at all and I’m still not acknowledging it as something that actually happened in reality. And you can save the “but they really were fouls!” argument be­cause that also really was goaltending at the end of the UNC-Washington game (as well as a clear clocking error) and that was not called either. So as sad as it is to admit, the tournament has been way too much about the officiating so far, and clearly for all the wrong reasons. Someone needs to send the referees at the tournament a memo about how no one cares about them and, if at all possible, I would like to never have to see or think or hear about them. At the same time, I can honestly say that I see why some of these bad calls are being made, consider­ing the level of stupidity being displayed in the last few minutes of games by play­ers. There’s nothing quite like watching the last 90 seconds of a tied tournament game and having everything happen – I mean absolutely everything – from players throwing the ball off each other’s faces to players dribbling out of bounds or throw­ing up 70-foot heaves with five seconds still left on the clock. Not once have I actually seen a last shot come near the hoop. With all that good stuff happening, not forget­ting the occasional foul with 0.4 left on the clock when the opposing player is 90-feet away from your hoop, I’d probably make a few bad calls myself.

In their 32-point blowout win of a very solid George Mason team, the Buckeyes shot 61 percent from the field and 61per­cent from downtown, while combining for 23 assists and only nine turnovers. Their three best perimeter players – David Lighty, William Buford and Jon Diebler – combined to go 15-for-22 from behind the arc. Ohio State also happens to have freshman Jared Sullinger on their team, probably the best big-man in the coun­try. To say that Kentucky has their work cut out for them this Friday might just be an understatement.

4. Charles Barkley may, or may not be, the greatest TV analyst of all-time.

“Man, they are horrible.”