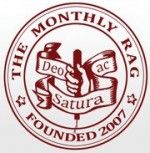 On Friday, February 11, Col­gate’s satirical newspaper, The Monthly Rag, launched its new website under the URL www. themonthlyragonline.com. The site debuted simultaneously with the February 11 edition of The Monthly Rag and enjoyed moderate success in February, accumulating 2,273 page views.

Traffic to the site exploded last week after The Monthly Rag released its new featured satirical video “Bro­date” on March 14. Filmed both on Colgate’s campus and in local Ham­ilton businesses, the video mocks the advertising campaigns of online dat­ing services and claims to be an aid in “the search for bromance.”

Soon after it was published on The Monthly Rag’s website, the video was picked up by the popular blog barstoolsports.com. Although it was criticized by the editors of the blog, “Brodate” was voted on by 213 view­ers and received an average of 3.61 stars out of 5. In under two weeks, the video has accumulated more than 9,336 views and the Monthly Rag’s page views grew to 3,336 in March.

Editor-in-Chief of The Monthly Rag and senior Ceci Menchetti be­lieves that the early success of the site is another sign of progress for the publication.

Founded in the spring of 2007 under the mantra “13 writers with 13 stories after 13 beers,” the paper was originally printed in the Cooley Science Library and stapled together by enthusiastic students without sup­port, permission or funding from the University. The popularity of the pa­per encouraged students to apply to the Student Government Association for recognition and funding, which it received officially in Spring 2009.

Menchetti called the launching of the website “another step” and added that she hopes The Monthly Rag will continue to have “an impact on campus for many more years.”

The website was designed and cre­ated by first-year Daniel Swiecki who registered the domain name with Godaddy.com. The site is currently hosted on a private server. It now of­fers visitors the opportunity to inter­act with the newspaper by leaving comments, writing to the editors and viewing archived issues of the paper dating back to its beginnings in 2007. It is currently “liked” by 102 people on Facebook.

“I think the team at The Monthly Rag really ‘gets’ new media, as evi­denced by the new video content on the site,” Swiecki said.

Executive Editor and senior Greg Reutershan reports that there are currently several new video projects under consideration and that “Brodate”‘s success has been very encouraging.

Starring seniors Jason Cohen and Mike Newberg and first-years Peter McEnaney and Ben Mandell, the video was written by Reutershan and is narrated by sophomore Nick Andreassi. Ju­nior Andy Peng filmed and col­lated “Brodate.” The lighthearted video claims to offer a solution for male, “bro” friendships and asks, “Wouldn’t it, like, be great if you met someone who shared your interests, and appreciated you for who you really are?”

Newberg said that working on the video was a “great experience,” adding that ordering ten shots of water at the Hour Glass was an in­teresting experience because “people were giving us weird looks.”

Reutershan has been very pleased with the success of the video and is excited to generate new content for the website. He also noted that he was surprised by how easy the process was for students.

“We had been wanting to branch out to a website for a long time,” Re­utershan said. “The pieces just kind of fell into place when a couple of first-years said they knew what they were doing with web design.”

The launch represents a new mo­ment of creativity for Colgate students. Without any additional technical sup­port from the University, students were able to launch the site in just “two to three weeks,” according to Reuter­shan, and the actual web page coding and launch took only three days. The Monthly Rag’s website is not currently linked to Colgate University’s website.

Other student groups are also currently pursuing online options. Swiecki reported that he is also cur­rently working on a “music shar­ing and discovery website” for the student music organization, Broad Street Records. The Maroon-News launched its new website in Novem­ber 2009, and like The Monthly Rag, it was also created without funding from the University.

As other student groups follow suit, The Monthly Rag has vowed to keep its content fresh. Reutershan hinted that students could see a “Saturday Night Live, Weekend Update-esque” satirical news program this semester.

The next issue of The Monthly Rag is scheduled to appear April 7.