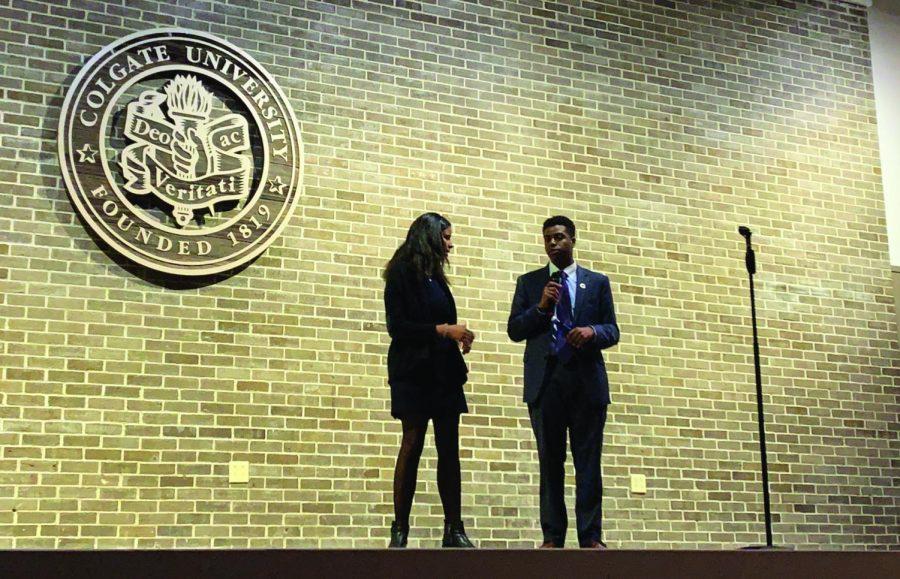 President Johns and Vice President Elarabi address the attendees at the speak-out.

Community members responded to a racist message that was written on a student’s whiteboard in Russell House early last week at a speak-out hosted by the Student Government Association (SGA) on Wednesday, October 30 in the Edge Café. The speak-out served as the setting for open discussion and airing frustrations about the incident.

In their introductions, Johns and Elarabi acknowledged the incident involving a Russell House resident’s whiteboard and targeted use of the n-word from the evening of Tuesday, October 29.

“It is tragic that something like this ends up happening every year or so,” Johns said.

Johns went on to recount the other racist incidents he has seen unfold in his time at Colgate, including the glue gun incident, in which a black student was falsely reported as an active shooter, resulting in a campus-wide lockdown on the evening of May 1, 2017.

Johns also commented on the importance of community and unity in moments of strife caused by racially charged incidents.

Johns also made a note of the role of SGA in planning the speak-out.

“Often times it’s the wrong people doing most of the work, and so we wanted to lift that burden so that we could all contribute here,” Johns said.

The students, faculty and staff in attendance faced the stage, where two microphones stood on either side of the Colgate crest. Attendees filled the room, sitting and standing wherever space was found. President Brian Casey and Provost and Dean of the Faculty Tracey Hucks ’87, MA ’90 took to the stage following Johns and Elarabi.

Casey began his remarks by commenting on the importance of recognizing the whiteboard incident as racist.

Casey informed attendees that an investigation into the incident opened that morning. Hucks spoke about the release of Colgate’s Diversity, Equity and Inclusion (DEI) Plan earlier that day. Hucks stressed that this plan had been in the works for months, with its release intended for October 30 for more than a month.

“Never did we think that this [whiteboard] event would happen when we were ready to launch [the DEI plan]. We wanted [the release] to be [at] a time when it didn’t have to be something on campus that we were reacting to. We wanted it to be an administration and task force and working groups that were being proactive about these issues, and expressing our commitment to them without having to always be seen as though the administration had to do this, or had to react to it,” Hucks said.

Hucks also shared her perspective as an alumna who attended similar speak-out events as a student.

“We will do all that we can to make sure that Colgate will continue to be a space where diversity, equity and inclusion are not just reactionary principles, but they are foundational principles to who we are in the third century,” Hucks said.

Many community comments and calls to action were directed at the members of the administration present, calling for more support for students of color and hiring more faculty of color.

Junior Bilal Boussayoud spoke about the pattern of racist incidents that has seen at Colgate.

Boussayoud also noticed that these racist incidents tend to happen up the hill in predominantly underclassmen spaces. He said that these younger students never learn why this is wrong, and graduate remaining ignorant and biased.

At around 9:00 p.m. Johns asked all non-student attendees to clear the space to allow students a closed space for discussion amongst themselves. At this time, faculty, staff and members of the administration cleared the Edge Café. As the crowd dwindled, Johns closed the night with final words of encouragement and action.

“Report these people,” Johns said. “Let them know there are consequences for what they say and do.”