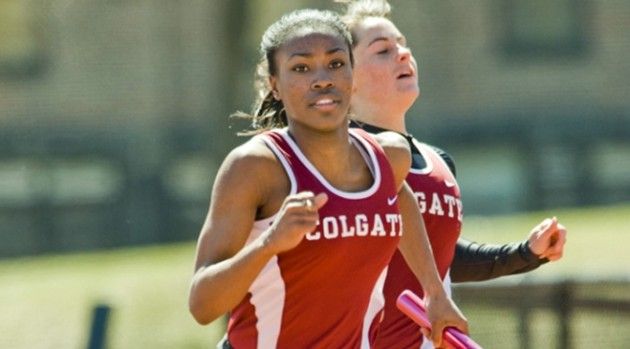 Last Saturday, the Colgate men’s and wom­en’s track teams traveled to Boston University to compete in the Valentine Invitational. As has been the case for much of the season, team scores were not recorded. That said, several Raiders broke personal and school records and several members of the men’s team qualified for the IC4A Championships.

Junior Michelle Miller stole the show for Colgate at the annual meet, competing well in several events, including a school record in the 400-meter dash. In the 200-meter dash, Miller placed 14th overall out of a field of over 130 runners, finishing with a final time of 25.47. Miller followed up her strong performance in the 200-meter dash with a record performance in the 400-meter competition. Miller posted a blazing time of 57.42 in the event, which was good enough for eighth place overall out of over 100 runners. Miller broke the Colgate record by one-tenth of a second, breaking her own record. The time was also a season-best in the Patriot League.

“Breaking my own record gives me reassur­ance that I haven’t lost my speed or peaked out in my sophomore year,” Miller said.

In the 500-meter dash, the Raiders were able to place two runners in the top-15. Junior cap­tain Alexandra Atkinson placed ninth overall with a final time of 1:16.89 and was followed in 13th place overall by first-year teammate Jamie King-Prunty, who completed the race in a very respectable 1:17.65. In the relay events, Col­gate impressively continued its success, placing seventh out of 38 teams. Colgate’s ‘A’ squad of Atkinson, first-year Cailey Feisel, King-Prunty and Miller cruised through the race, snapping the tape in a mere 3:54.68, which was also a new Raider record. The time demolished the previous record of 5:56.10, set over seven years ago.

“Breaking the 4×4 record gives me confi­dence in my teammates and lets me know that we all are on the same page and have the same goals,” Miller said.

For the first time this year, the Raiders ap­peared to struggle in the long distance events – a trend that Colgate will look to reverse at next weekend’s meet.

In the men’s portion of the meet, the squad built off on the newfound success of the women in the sprinting events. In the 200-meter dash, junior Graham Tooker placed ninth overall, crossing the finish line in a quick 22.01. Tooker continued his strong showing in the 400-meter dash, placing 13th overall in the event. Tooker got off to a quick start in the fourth heat in the event and held his own for the rest of the race en route to a final time of 48.62.

The Raiders translated their success into the mid-distance events, where junior Tim Me­tivier placed ninth overall in the 500-meter run. Metivier snapped the tape in just 1:04.57. Though he placed at the tail end of the top ten finishers, Metivier’s time was just one second behind first place finisher Tyrone Ross. Metiv­ier was followed closely in 15th place by senior Dan Schwaibold, who completed the event in 1:05.58. Finally, in the 800-meter run, senior Andy Smith was able to break a school record.

Smith got off to a hot start and did not re­linquish his lead once in his heat en route to a tremendous time of 1:52.57. The time was also good enough to qualify Smith for the IC4A Championships in the event. The Raiders also experienced a relatively good deal of success in the sprinting events, primarily in the 60-meter hurdles. Junior sprinter Alex Coco qualified for the final heat and finished by placing fourteenth overall in the event. Coco got out of the blocks quickly and was consistent throughout the course of the event, cruising to a final time of 8.66 sec­onds. In the final event of the meet, the Colgate ‘A’ squad of Smith, senior Jonathan Knowlton, Tooker and Metivier continued its strong per­formance in the 4×400 relay event, placing thir­teenth overall. The Raiders mixed strong indi­vidual running with smooth transitions, leading to an impressive time of 3:19.31.

Both the men’s and women’s track teams will be training hard this week in preparation for the weekend, in which they will compete in the Patriot League Championships, to be held at the US Naval Academy in Annapolis, MD on Saturday and Sunday.