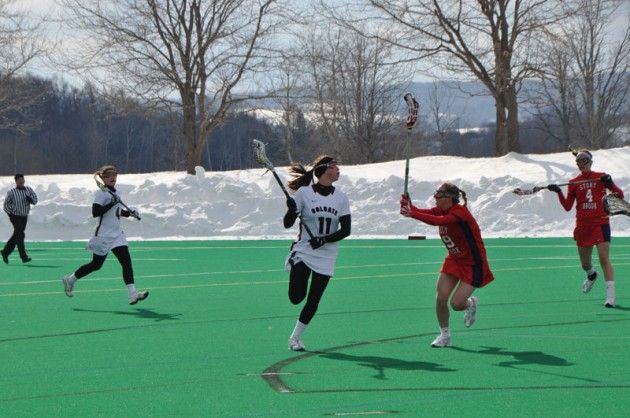 This past Saturday, the Colgate wom­en’s lacrosse team held its season opener against Stony Brook on Tyler’s field. The Raiders were victorious, edging out Stony Brook by a final score of 17-15.

The Raiders soared ahead in the first ten minutes of play, landing a 5-0 lead over Stony Book. Junior attackman Ka­tie Sullivan and senior midfielder Col­leen Bubnack both scored two goals, and junior Greer Goebels also added an unassisted goal. Stony Brook answered with three consecutive goals. The Raid­ers fought back with another four-goal streak as Bubnack scored her third of the day.

First-year midfielder Alison Flood scored her first ever collegiate goal to make the score 7-3. Just 30 seconds later, Bubnack added her fourth and final goal to the scoreboard, pushing the team’s lead to 8-3.

Sophomore midfielder Quincey Sp­agnoletti furthered Colgate’s advantage with her first goal of the season with 10:58 left in the first half.

Stony Brook outscored the Raiders in the remaining minutes of the first half with three goals, but Flood and senior Kate Bergstom quickly responded with one goal apiece to finish the half with a lead of 11-6 over Stony Brook.

When the second half began, the Sea­wolves came out as a completely new opponent, fired up and ready to com­pete. Stony Brook put two points on the scoreboard within the first five minutes of play. Sophomore midfielder Amanda O’Sullivan countered with a quick-stick shot that found the back of the net. Teammate Courtney Miller also scored, rounding the point total to 13-8.

The tally did not deter Stony Brook’s hopes, however, and the Seawolves fierce­ly fired back with three back-to-back goals. Play was suspended briefly midway through the second half after a white­out left Tyler’s field with no visibility. Twenty minutes later, however, the snow was cleared off the lines and the women resumed play.

Both Colgate and Stony Brook each had four more goals on the game to bring the final score to 17-15. Colgate’s Berg­strom and Sullivan successfully found the back of the net and were able to hold off the Seawolves’ last attempts at victory.

Noteworthy goalie Christina Roa had three saves in her forty-nine minutes of play. First-year, Hanna Longwell saw ten minutes of play in the start of the second half and had one save on a free position. Both Roa and Longwell found success on the clear, with 12 of the 14 successful.

One of the most notable triumphs of the game was the team’s success in draw controls. In the first half alone, Colgate possessed 13 out of the 18 draw controls.

In the second half, both Colgate and Stony Brook had 8, one of the reasons for the more evenly matched half of play. Monica White, a first-year taking the field for her first time at Colgate as a center, contributed to the team’s overall success on the draw. White led the team with five personal draw controls.

“It was an awesome as well as nerve racking feeling playing for the Colgate Raiders.” White remarked, “I eventually put the nerves behind me and had a fun time out there despite the frigid weath­er…”Winning a majority of the draws was definitely a contributing factor to the team’s success.”

First-year Alison Flood also had an impressive first-ever collegiate game all across the board. She raked in two goals, one assist, two ground balls and three draw controls for the Raiders.

“I was very nervous when the coach told me I was starting, but as soon as we started warming up and I saw how pumped up all the upperclassmen were, I knew it was an honor to be starting as a freshman, so the nerves disappeared and I wasn’t so anxious to take the field for the first time,” Flood explained. “I think our zone ride was a huge factor during the game on Saturday. Stony Brook couldn’t move the ball up field which gave us many opportunities for turnovers.”

“I think the zone ride that we have been practicing really intimidated Stony Brook because they were unaware of how to break it,” teammate White agreed.

In the coming weeks, we can expect much more from the women’s lacrosse team.

“As the season progresses we will be playing and working together as team more and more and that will help us get used to how one another plays in game situations,” White said.

The women will take the field on Thursday when they face Syracuse at 5 p.m. on the road.