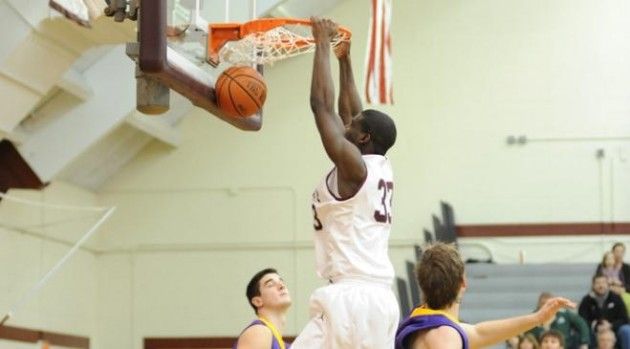 The Raiders picked up their fourth win of the season against Holy Cross and were led by senior captain guard Joe Hoban who scored a career-high 22 points. Junior for­ward Yaw Gyawu was also a key contribu­tor for the Raiders, scoring 21 points. It was an overall good shooting night for the Raiders as junior forward Sterling Mel­ville contributed with 11 points and eight rebounds and junior forward Nick Pas­cale scored eight points to go along with his 10 boards.

As a team, the Raiders put forth one of their most impressive shooting performanc­es with 54.4 percent from the field as well as 41.7 percent from beyond the arc. The team out-rebounded Holy Cross 34-23.

After the road victory against Holy Cross, Colgate came back to Hamilton to battle Navy on Saturday. The Midship­men, like the Raiders, came into the tilt with a 2-4 record in Patriot League play. The game was arguably the most exciting of the season, but it ended in a heart­breaker for Colgate.

Four Raiders scored in double figures, but it was not enough to fend off pesky Navy. Pas­cale finished with a career-high 18 points and 10 rebounds and sophomore guard Mitch Rolls chipped in with 15 points to go along with six assists. Melville was a key factor for the Raiders by scoring 14 points and grabbing eight rebounds.

The game was tied at halftime, but the Raiders fell behind after that. This season, the Raiders have been unable to continue to compete during the second half, but this time they fought back and played hard. Af­ter falling behind by as many as nine points in the period, the Raiders responded by tying the game at 62.

In the first overtime, Colgate took a 66-62 lead on a couple of layups, but Navy was far too resilient and made clutch free throws and key shots to send the game into a second overtime that began with both teams tied at 68. A couple of crucial missed layups by the Raiders allowed for a Navy comeback that took the game into double overtime.

Navy began the second overtime with a 7-0 run – a lead that proved to be insurmountable as the Raiders battled back admirably with only a few moments left in the game. Colgate closed the gap to as close as 79-78, but it simply was not enough. Rolls got the Raiders back with a 3 pointer to tie the game at 81, but his attempt to clutch the victory was unsuccessful.

This Saturday, Colgate will travel to West Point to take on Army at 4 p.m. before host­ing the Lafayette Leopards next Wednesday at 7 p.m.