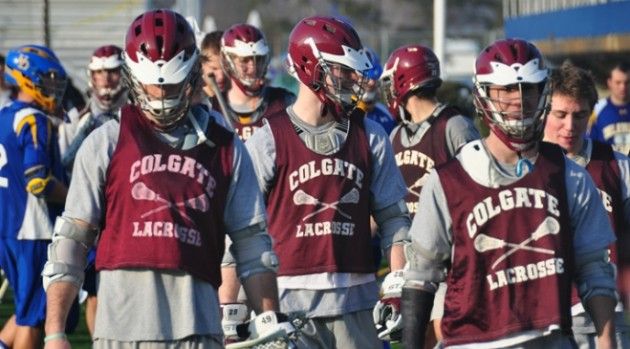 Last Wednesday’s preseason scrimmage against local opponent Le Moyne College, runner-up in last season’s Division II tour­nament, marked the first home bout of the season for the Colgate Men’s lacrosse team and the Raiders did not disappoint. Despite the game’s postponement from the day before and near-freezing tempera­tures, the team was able to grind out a hard-fought 8-7 victory against the visiting Dolphins. Errant passes and communica­tion breakdowns signaled obvious signs of rust for both squads, but the scrimmage was undoubtedly an excellent opportunity to evaluate lineups and iron out wrinkles before the season opener at Hofstra on February 15.

With regard to line-ups, junior Jared Madison played the bulk of the game in net, making several solid saves facing a pa­tient Le Moyne offense. Madison will look to build on the experience gained last sea­son, in which he started nine games and finished with an 8.65 goals against average and .569 save percentage. Freshmen goal­keeper Conor Murphy relieved Madison in the fourth quarter and closed out the victory. Senior captain Greg Perkins and freshman Bobby Lawrence played signifi­cant time on defense and prohibited the Le Moyne attack unit from getting into a groove for the majority of the afternoon. The Dolphins’ possessions were brief and successful clears by the Raiders defense and midfield units allowed the Colgate offense to maintain long possessions and dictate the pace of play. Perkins, a starter since his sophomore year and a 2010 All-Patriot League second teamer, will look to lead a defensive unit that features seven new faces but retains veteran contributors in senior Will Treichler and junior Jason Copper­smith. Senior midfielders Dave Tucciarone and Frank Coughlin and junior John Don­nally saw significant time at short-stick defensive midfield against the Dolphins and also factored heavily in the transition game. Sophomore Robert Grabher and Senior Jim Carroll split time at the face-off X and won the majority of the draws (five apiece), further allowing the Raid­ers to maintain a patient, albeit effective, approach offensively.

Offensively, senior captain Rob Bosco, sophomore Connor Brown and freshman Jimmy Ryan comprised the first midfield unit, while junior Jeff Ledwick, freshman Brendon McCann and sophomore Matt Bak­er rounded out the second team. Both mid­field units delivered, with Ledwick chipping in an unassisted goal in the second quarter and junior captain Kevin Gordon connect­ing with John Donnally on a fast break for a score in the third, but the bulk of the of­fense came from the attack. Senior captain Andrew Mould, junior Patrick Campbell and sophomore Peter Baum, last season’s leading goal-scorer, controlled the offense and domi­nated the Le Moyne defense. Baum finished with four goals and an assist while Campbell added a goal and two helpers. Mould added one goal and also delivered a massive hit late in the second quarter, jarring the ball from the Le Moyne player and kick-starting a fast break opportunity.

Baum and Campbell finished second and third in scoring on the team last sea­son, respectively, and the Raiders also re­turn their leading scorer, senior Ben Mc­Cabe, who ended last season with 24 goals and nine assists. Baum is listed as a pre-season All-American after ranking on the All-Patriot league first team following last season. Attack will unmistakably be an area of strength for the Raiders, but the midfield welcomes back key contributors as well, despite the graduation of two-time captain Ian Murphy. Carroll and Gor­don, in addition to junior Chris Zielinski, who tallied seven goals and 10 assists last season, will also factor in at midfield for the Raiders. Carroll made the All-Patriot League second team last season and should also have a significant role this season. Gor­don appeared in every game last season and played as a long-stick midfielder against Le Moyne on Wednesday. Overall, the Raiders lose few starters from last season’s team and are fortunate to have veteran leadership on defense and at midfield and attack.

Tuesday’s 4 p.m. opener in Hempstead, New York stands as the Raiders’ first game against the Hofstra Pride since 1961. Hofs­tra advanced to the NCAA tournament last season, but bowed to powerhouse Mary­land in the opening round. The Raiders are 0-2 in their only two meetings with the Pride and looking to improve off of what can only be considered a disappointing season in 2010 – finishing at 3-10 overall (2-4 in Patriot League play) after going 9-3 the season before and reaching the NCAA tournament in 2008 – but if last Wednes­day’s scrimmage is any indication, the team should thrive.