Women’s Hockey Gets Swept Out of the Playoffs 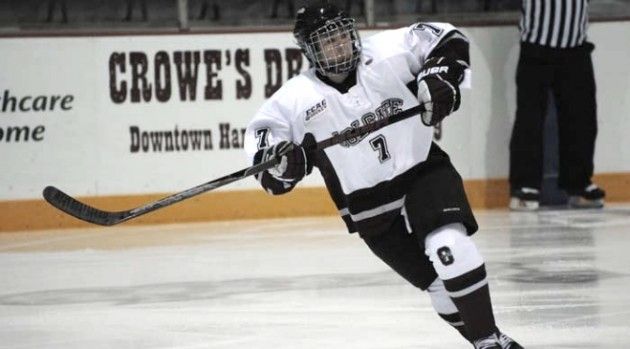 Last weekend, the Colgate women’s hockey team saw its postseason hopes end­ed by getting swept on the road. On Fri­day, Colgate experienced its first setback of the weekend when it fell to Harvard 7-0 in Cambridge, Massachusetts. The next day the Raiders were defeated by the Dartmouth Big Green in a close 4-3 game in Hanover, New Hampshire. Although the Raiders came close to tying the game with two goals in the second period and a third in the final period, Colgate could not catch up to No. 10 Dartmouth.

The loss to the Big Green ends the Raiders’ 2010-11 season with Rensselaer clinching the final spot for the ECAC playoffs by winning a tiebreaker over Colgate and Yale, as the three teams fin­ished tied for eighth place with an 8-12- 2 ECAC Hockey record. First-year Shan­non Doyle and Rachel Walsh as well as sophomore Jenna Klynstra each scored a goal in the game against the Big Green.

In Friday’s game against the Harvard Crimson, Colgate was off to a good start, outshooting the Crimson 4-0 at the be­ginning of the first frame. However, in no time, Harvard soon came alive. The Crimson began attacking the Raiders’ defense and went on an offensive surge, which led to Harvard’s first goal at the 10:34 mark.

Through the remainder of the first period Colgate started to lose its rhythm and get a little careless with the puck. This led to a series of penalties called against the Raiders that helped the Crim­son tally three more goals over the next seven minutes, two of which were dur­ing power plays, giving the Crimson a huge 4-0 advantage at the end of the first stanza.

In the second frame, it was Harvard who came out to an explosive start, out­shooting Colgate 7-3 in the first five minutes of play. Although both teams continued to battle it out hard on the ice, the Crimson created the majority of the scoring opportunities throughout the second period.

Harvard’s hard work eventually paid off at the 10:38 mark, picking up a short-handed goal to extend its lead to five goals. Although down by a five-goal deficit, the Raiders gained momentum and attempted to make a comeback, fir­ing a series of shots in the 15th minute of the second period. Unfortunately, it was Harvard that found success in the last minutes of the second frame, giv­ing the Crimson their sixth goal at the 17:02 mark.

Harvard then went on to score once more in the final 20 minutes of play to win the game 7-0.

During Saturday’s game against Dart­mouth, Colgate came out to a productive start, quickly creating smart scoring op­portunities in the first frame. However, within the first few minutes of play, the Raiders were called for a penalty. This al­lowed Dartmouth to find its game, lead­ing the Big Green to outshoot Colgate 8-0 over the next several minutes of play and find the net at the 7:28 mark to take a 1-0 lead.

Although the Raiders were feeling the pressure, they stayed in the game, firing a series of shots on their opponent’s net. Unfortunately, when time ran out in the period, ‘Gate found itself trailing by a single tally.

The second frame began similar to the first with Colgate creating the first two scoring attempts in the opening min­utes. However, like before, it was the Big Green that found the net at the 3:06 mark and then again just three minutes later at the 6:16 mark, giving Dartmouth a three-goal advantage.

However, the Raiders returned the favor just a minute later. With the help of sophomore defense Jessica Hootz and first-year forward Jocelyn Simpson, Doyle put Colgate on the board with a power play goal to close the gap to 3-1. With newfound energy and a surge of momentum from their first goal, the Raiders began to attack Dartmouth’s net aggressively, outshooting the Big Green 7-3 over the next few minutes. Colgate was soon rewarded for its hard work when it netted the puck at the 14:45 mark. Klynstra connected with junior defender Amanda Kirwan who blasted the puck into the net, putting the score at 3-2. Although the Raiders continued to carry their momentum forward, Dart­mouth was determined to keep its lead. The Big Green answered back at the 18:05 mark to put the score at 4-2, giv­ing them a two-goal cushion going into the final 20 minutes of play.

In the third frame, both teams came out on the ice determined to win and play aggressive hockey.

Colgate searched for scoring oppor­tunities to reduce the scoring margin once again, while the Big Green looked to maintain their two-goal lead. The Raiders continued to play hard, which allowed them to put the biscuit in the basket at the 14:16 mark as Walsh, with assists from Kirwan and senior co-cap­tain Jessi Waters, scored Colgate’s third of the game. However, despite their best efforts, the Raiders could not find an equalizer, leading to the Raiders’ 4-3 loss to Dartmouth.

Junior goaltender Kimberly Sass had 26 saves for Colgate against Dartmouth.The Raiders end their season with an 11-19-3 overall record and an 8-12-2 conference record. With the win, No. 10 Dartmouth secured the third seed in the ECAC Hock­ey playoffs, with No. 2 Cornell, Harvard and Princeton taking the first, second and fourth seeds respectively.