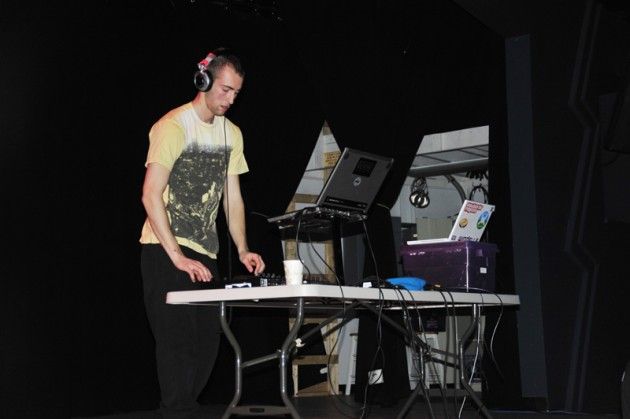 Despite the large size of the venue, DJ Whole-Z managed to fill most of the Palace The­ater during his performance on Saturday from 11:00 p.m. to 2:00 a.m. Doors opened at 10:30 p.m. and Colgate’s own senior Tom “DJ TCUP” Cuppernull opened for Whole-Z until about 11:30 p.m. The event was sponsored and organized by the Blue Diamond So­ciety. The atmosphere was well received, with many attendees expressing their appreciation for a coat room, given the blizzard and freezing temperatures outside. In addition, many compliments were given to the quality of the light show and its integration with the music.

Whole-Z pumped up the crowd by mixing and mashing up crowd favorites including Gwen Stefani’s “Hollaback Girl,” The Lonley Island’s “I Just Had Sex,” Yolanda Be Cool and Dcup’s “We No Speak Americano” and Cee Lo Green’s “F*** You.” Hailing from Norwich, Vermont, Andrew “DJ Whole-Z” Holzberger is currently a sophomore at the University of Vermont. He focuses on creating unique mashups, mixes, dubstep and original tracks. One of his signature tracks is called “Tik Tak Toe” in which he mashes Ke$ha’s “Tik Tok,” Five for Fighting’s “100 Years,” the Black Eyed Peas “Where is the Love” and Queen’s “Under Pres­sure.” Some of his other mashups include “Papersweet Walk,” “That Tree,” “Wanna Vida” and “Dirty Secrets.” Although he is currently unsigned, most of his tracks are available on­line. Whole-Z shows much promise and will likely have a successful future career given how popular his tracks were this weekend.

All the proceeds from the event went to Keshet, an organization devoted to supporting “Jewish religious growth and encouraging community integration for individuals with de­velopmental disabilities.” Based in Illinois, Keshet provides numerous programs including schools to help educate these children. In addition to proceeds from ticket sales (with tickets costing only $3), the Blue Diamond Society also accepted donations and managed to raise a total of $1,521 to send to Keshnet.

Ultimately DJ Whole-Z’s performance was extremely well-received by the Colgate community, and he would likely be welcomed back for another performance on campus.