What Music Looks Like: A Critic’s Favorite Album Covers 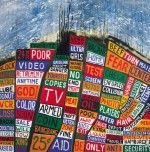 A great album cover captures one’s attention quicker than any singular song can do. An iconic album cover links images with sound seamlessly: think The Beatles’ White Album or Pink Floyd’s Dark Side of the Moon. These are my five favorites:

Featured solely on the foreign release for fear of scaring off their more conservative U.S. listeners, the album’s cover artfully features, in black and white, the naked bottom and hip of a woman with an alluring black-gloved hand resting on the hip. As tantalizing as that description sounds the cover is done rather tastefully, unlike let’s say White Snakes’ Lovehunter or The Black Crowes’ Amorica.

2. Radiohead – Hail to the Thief

The cover of the British band’s sixth album is an example of the French art movement of Lettrism. The cover is in the style of a road map, with words and phrases in the style of buildings. While the words are very much a statement against the Bush administration (and the album’s title, for that matter), I’m purely a sucker for art-based covers and don’t pay much attention to the political undertones.

Featuring a baby Wayne with face tattoos, a lavish suit and a pinkie ring to boot, the rapper’s 2008 release paid homage to his predecessors Nas and Biggie, both of whom used pictures from their childhoods on album covers. Who knew there was an actual child­hood beneath the larger-than-life rapper? The cover serves to hu­manize the artist but also sends a message to the public that he is “the best rapper alive.”

The iconic 3D glowing cross coupled with the album’s stylized title of † sets the mood for the band’s dark, punk inspired dance album. The cover is simple, yet gripping and invites you to give the album a listen.

The second art-based album cover on this list is a detail of the Dutch artist Pieter Brueghel the Elder’s 1559 painting “Neth­erlandish Proverbs.” Upon first glance the painting seems like a plain country scene, but delve a little deeper and there’s some strange stuff going on. Almost every folly and sin of mankind is depicted through 100 different proverbs in the painting, making for an extremely interesting cover.