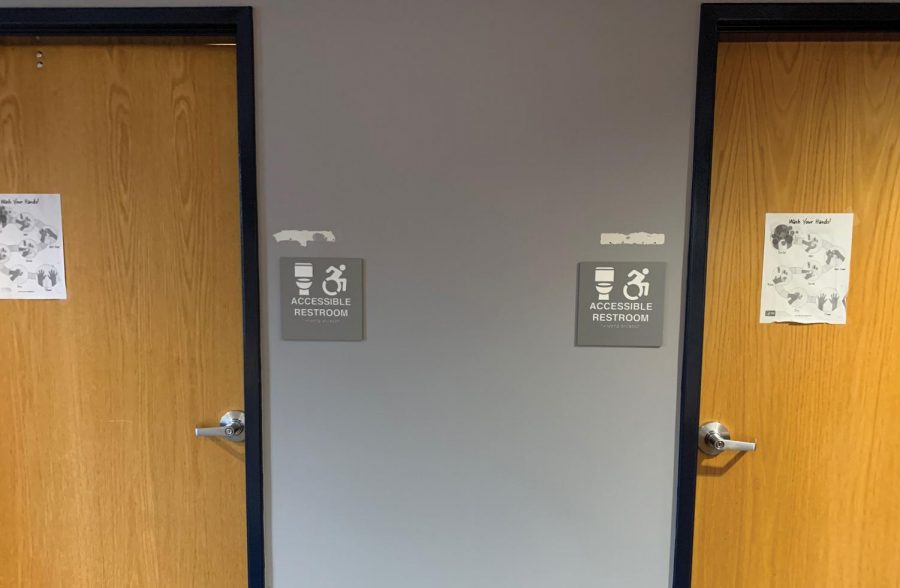 Curtis Hall recently converted two previously binary bathrooms on the fifth floor of the building to be all-gender bathrooms. This specific conversion was not initiated by administrators of the Ciccone Commons; rather, the proposition came from the fifth floor’s Community Leader (CL), Cheeranjeev Purmessur.

This transformation from the previous men’s and women’s single-stall bathrooms to two gender-inclusive bathrooms was mainly motivated by the imbalance between the number of male students and female students on the fifth  floor of Curtis Hall. There are 28 male students living on the floor with only two female residents.

According to fifth floor resident sophomore Ignacio Villar, Purmessur recognized this early in the semester and had actually converted the two bathrooms to a gender-neutral status himself by simply hanging up paper signs on the doors of each bathroom informing students of the adjustment.

On September 3, Purmessur explained to the residents of the fifth floor that Colgate’s Office of Residential Life informed him that a decision to convert a bathroom’s status had to first be approved by the Area Director of Curtis Hall. Subsequently, the two single-stall units were reverted back to their binary status, according to Villar.

Purmessur further explained the process of changing the bathrooms.

“We have a meeting with all the residents on the floor to discuss the situation and see if anyone has any objections to the idea of gender-neutral bathrooms. If everyone is on board, the proposal is brought up to the Area Director of the building. In my case, it was Peter Bandel.  We also check with the custodian to see if they have any objections. From then on, the Area Director handles the situation,” Purmessur said.

Once the conversion to the gender-neutral bathroom units was approved, the signage outside of the two bathrooms were altered to non-binary.

Sophomore Magnus Vogel, a student who lived in Curtis Hall last year and currently lives on building’s fifth floor, supports the decision to change the bathrooms. He said he thinks this was the right decision for the floor, given the gender imbalance.

“Going forward, I think gender neutrality is an idea everyone should strive toward in order to eliminate biases and norms; we’re all human and we should all behave and treat people that way, with undeniable respect. I think the bathrooms are a good start, but we need support from everyone in order to make this idea a reality. It’s possible,” Vogel said.

“The bathrooms at the beginning of the year were just chaotic. There were around 28 guys using a bathroom with two stalls, two showers and a secondary bathroom with just one stall.  The door from one of the stalls in the primary bathroom was broken for about a month. The door was just off the hinges, essentially making it a urinal. I appreciate that they made this decision,” Villar said.

Co-Director of the Ciccone Commons and professor of psychology Rebecca Shiner recognized the frequent usage of the Curtis classroom and the bathrooms’ locations across from this community space, so the benefits of changing the bathrooms goes beyond just the students who live on the fifth floor.

“We thought that making the two single-stall bathrooms gender neutral would make these bathrooms more flexible for use by anyone using the classroom during classes and events,” Professor Shiner said.

The Diversity, Equity and Inclusion (DEI) initiative of Colgate’s Third-Century Plan states that the University will continue to work toward increasing the quantity of gender-inclusive bathrooms on campus, in addition to providing a map of where to locate these bathrooms.