Living on Oneida Land: Colgate Hosts Oneida Faithkeeper to Teach About Her Practice 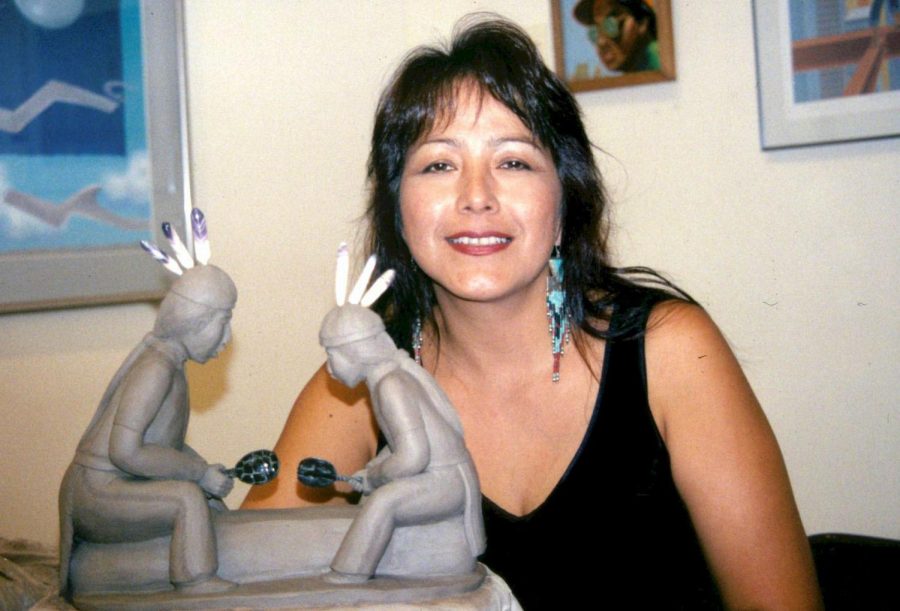 Schenandoah describes her job as a Hodinoshoni Wolf Clan faithkeeper as an advisor to people who are seeking a path and knowledge.

“Within my own nation I help with ceremonies and see that they continue. The tradition of my tribe is to give thanks to everything in life, even the negative, because we believe that everything is a life lesson and a gift. My ceremonies always open up with giving thanks,” Schenandoah said.

She practices the tradition of thankfulness though all the stages of production of her art—especially through her choice of medium and her treatment of materials. By using natural and local materials as the medium for the majority of her artwork, Schenandoah maintains her connection to and gratitude for the Earth’s natural resources.

Schenandoah also exhibits thankfulness for Hodinoshoni cultural traditions, values and legends by using them as subject matter for her artwork. Specifically, Schenandoah explores the role of the woman in Hodinoshoni matriarchal society by focusing her artwork on themes of motherhood, birth and life.

“In Hodinoshoni culture, women are at an elevated status because life flows through us; it is men’s jobs to protect this status,” Schenandoah said.

As a means of depicting the movement of life through the female body, Schenandoah focused one of her pieces on the phases of pregnancy. By sculpting multiple miniature pregnant women out of clay—each woman in a different stage of pregnancy—Schenandoah enacted the Hodinoshoni tradition of thankfulness for life’s natural processes while also honoring the female body as a sacred vessel. She also explores themes of womanhood by drawing upon her personal experiences as a Hodinoshoni woman. As a mother and grandmother, Schenandoah personalizes her artistic representation of womanhood and motherhood by asking her grandchildren to pose for her art.

As a faithkeeper, Schenandoah is heavily connected to the histories and legends that lay the foundation for Hodinoshoni society. Often, she depicts these histories and legends in her art as a way of giving thanks to the Hodinoshoni people and culture. In one piece, Schenandoah carved a bear—an ode to the Bear Clan who are known as Hodinoshoni healers—as a way of representing the “mindset of becoming a healer: coming into your gifts and passions,” which she presented after telling the legend of how the Bear Clan became known as healers. In another piece, she portrayed a snapping turtle—a symbol of the five Hodinoshoni nations and 13 thanks-giving ceremonies. When discussing her artistic portrayal of the snapping turtle, Schenandoah emphasized:

“When we give thanks for things they will continue to return. When we forget to give thanks they no longer return,” she said.

Through Schenandoah’s references to eternal thankfulness throughout her discussion, the audience was prompted to consider their privilege as members of the Colgate community and as individuals existing on Native American Oneida land. Schenandoah’s humble, grateful and creative approach to life serves as a reminder of the salience of remembering all that there is to be thankful for—even when it might be easier not to.