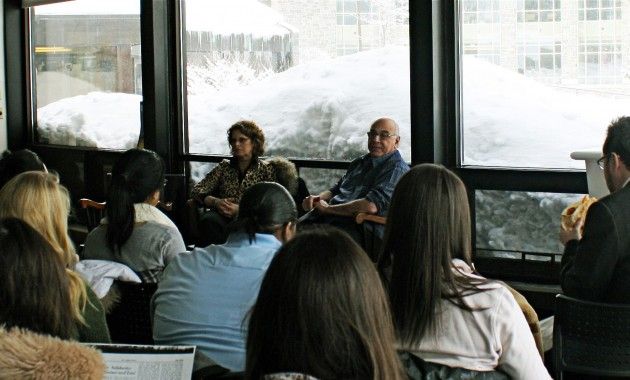 On Tuesday February 8, African American Studies and Women’s Study hosted a panel in the ALA­NA (African, Latin, Asian, & Na­tive American) Cultural Center to discuss the international impact of the Civil Rights Movement and its relevance to Colgate University.

“Wave after wave of issues of so­cial change washed upon campus,” Aveni said.

Focusing on “the transformative years,” 1963 through 1968, Aveni highlighted outstanding dem­onstrations of change at Colgate University, an institution that was dominated by a 98 percent white male population.

Upon mentioning his active in­volvement in the one hundred-hour sit-in at the Administration’s Office and spending three nights under the Dean of Students’ desk, the packed audience was immediately intrigued.

“I was impressed that a pro­fessor could take such interest in something that the students cared about so much. I was also surprised that an event like this happened at Colgate, and I’m proud that it did,” Junior Ali Atkinson said.

Aveni described the sit-in as a “gentlemanly sitting, unlike Berke­ley or Columbia,” where 350 stu­dents and members of the faculty discussed the issue of alleged dis­crimination in selecting fraternity members. The administration re­sponded by revoking charters and closing down certain fraternities.

“This sit-in has shaped the mold for a more diverse Greek Life com­munity today with members coming from all racial and socio-economic backgrounds,” Deombeleg said.

Professor of Sociology Rhonda Levine pointed out how the Alana Cultural Center serves as an es­pecially symbolic setting for this brown bag, as its foundation was an effect of the ’68 sit-in.

“Part of the student demands that followed from the ’68 sit-in was for curricular change including Afri­can American Studies and the need for a cultural center,” Levine said.

She supported the propertied rumor of Colgate University be­ing the first out of the “Three C’s” (Colgate, Cornell, Columbia) to demonstrate radical social action.

“It is a great legacy you all have and you should all embrace it,” Levine said.

She continued the discussion with how she was particularly moved by personally meeting Rob­ert F. Williams, an activist famous for being the president of the Mon­roe, North Carolina National As­sociation for the Advancement of Colored Persons (NAACP) chapter in the 1950’s and 60s.

Serving as the moderator, As­sociate Professor of History and Africana & Latin American Studies Pete Banner-Haley briefly shared his favorite activists of this time, one being a Colgate Alumnus, Adam Clayton Powell ’30. Above all, he conveyed his faith in Presi­dent Barack Obama’s confidence that “change is coming.”

As it is the beginning of Black History Month, the panelists in­vited participants to embrace Col­gate’s history in the Civil Rights Movement and to take action.

“I don’t care how you feel, I want to see you do something,” Levine said.