A Shot at Love: Cupid’s Shuffle 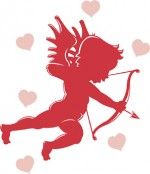 We all know Colgate as the dating school. Couples holding hands on cam­pus are a frequent sight and it is no won­der that students and their significant others flock to Frank dining hall for its romantic atmosphere and gourmet food. Hah! This could not be further from the truth, which makes Valentine’s Day a very peculiar holiday at this school. Cer­tainly no boy is going to send a bouquet of flowers to his latest Jug make-out, even on the odd chance he can remem­ber the girl’s name. Instead of centering this day around couples, however, the school hosted the Cupid’s Shuffle last Friday on February 11, which catered to people who are just looking to have a good time despite the looming holiday. It was an event for all those singles at Colgate, and even the few couples, to get together and celebrate Valentine’s Day with friends, or maybe even meet their next potential hook-up!

The Cupid Shuffle held a variety of activities, including sketch artists, a dance party, relationship/sex advice, raffles, free condoms, chocolate fondue and of course, speed dating. Whether looking to boogey down with friends, win some great prizes or sip on a tasty pink mocktail, the Cupid Shuffle was a great success! Pink and red streamers decorated the hall and the loud chat­ter and music set a great mood for the night. The evening kicked off with speed dating. Although such an idea makes one want to cringe with awk­wardness and desperation, it turned out to be a worthwhile experience! First-year Tess Heffernan was impressed by her speed-dating experience.

“At first it was really awkward and I found myself making up stories, but then I realized I was talking to some really cool guys and I saw this as an opportunity to meet some new people at Colgate.”

Once speed dating was over, Donovan’s Pub filled up with a crowd who was not looking for a special someone on Valen­tine’s Day, but rather enjoying the other numerous things taking place through­out the night. Since the event continued until 2:00 a.m., and most people do not have the energy to groove to music for such an extended period of time, students were able to get relationship advice and get sketches of their faces drawn. The best part of the night, explained first-year Sarah Baranes, was not the cute boys or free prizes, but the “chocolate fondue and mocktails! They were delicious and I found myself celebrating the true meaning of Valentine’s Day, which is the comfort of sweets.”

I think many can agree with Ba­ranes’s statement, and after the events of Friday night, I believe all that at­tended the Cupid Shuffle spent Mon­day afternoon with a different attitude than the rest of campus. Valentine’s Day is not a day for people to mourn over their lack of love life, but rather a day to rejoice in the love they do have from their friends and family!