Colgate Couture: Blogs–Fashion of the Future 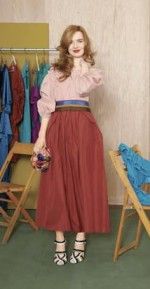 The fashion industry is one of many things that has been pro­foundly altered by the age of technology. In fact, with the arrival of the Internet came the birth of an entirely novel genre of fashion “jour­nalism”: the personal style blog. Suddenly, fashion-loving laypeople could “publish” and broadcast their ideas and photos to the public. And indeed, lots of bloggers have become something of celebrities with sizeable followings and even positive reception from the established fashion publications and designers.

Of course there have been some wary holdouts. Vogue Italia editor-in-chief Franca Sozzani recently made waves with some feisty cri­tiques of bloggers written, some­what ironically, on her own blog. She says, “Why are they so credit­ed? … [They] only talk about them­selves, take their own pictures wear­ing absurd outfits…They are like moths. [Their fame will] live only one night.” Ouch. It does, however, seem that Franca is in the minor­ity. The overall verdict has already been passed: most people love blogs and the characters who write them. I, for one, think blogs are great; it is not only about democratizing fashion, it is also about the wonder­ful inspiration such a multiplicity of voices creates. Below I have compiled a diversified roundup of a few of my favorite blogs for those of you looking for a stylish distraction.

If you are new to the world of fashion blogs you may be unfamiliar with it, but one of the finest and most famous fashion blogs out there is The Sartorialist (thesartorialist.blogspot.com). Written by Scott Schuman, a 15 year veteran of the fashion industry who one day closed his showroom to pursue his love of photography, this blog is a wonderful compilation of pictures and commentary on street style. Scott snaps photos of normal people in their everyday lives whose looks inspire him. The photos are strik­ing in their simultaneous genuine realism and editorial-esque aestheticism; his words are honest and insightful. Scott’s success in blogging has landed him a regular column in GQ, as well as gotten his work a place on the walls of the Victoria & Albert Museum in London and the Tokyo Metropolitan Museum of Photography.

For those who like the street style concept, another blog to check out is StreetPeeper (streetpeeper.com). The blog is written by a guy who simply in­troduces himself as “Phil.” He sets a casual, quirky cool tone for the site by explaining, “I started Street Peeper like late 2006, early 2007’ish after a variety of odd-jobs: failed internet startup, co-author of a trashy novel, fired from 12 restaurants in NYC, occasional party promoter, and I sold beanie babies out of my NYU dorm room…” Along this vein, the blog is pleasantly bare bones, broken down by city and populated by snapshots of super-chic regular folk with credits detailing who makes each piece of their outfit.

Yet another attention worthy blog is The Glamouri (theglamouri. com). Written by New Yorker Kelly Framel, self-proclaimed stylist, jewel­ry maker and photographer, this blog feels almost like a digital scrapbook. Alongside the clothes, it features shots of “inspiration boards” filled with fabrics, materials, trinkets and baubles; none of the text uses capitalization to create a familiar feel.

One more great blog, which like The Sartorialist has received a lot of press and notoriety, is Sea of Shoes (seaofshoes.typepad.com). The blog­ger is 19-year-old Jane Aldridge, who began her blog at the young age of 15. She lives in Dallas, Texas and has a wonderful affinity for vintage finds along with, as the name of the blog implies, couture-quality shoes. The photography is lovely and takes good advantage of natural surroundings. Jane’s commentary is incredibly readable and knowledgeable.

Finally, one last blog that deserves mention is Leandra Medine’s The Man Repeller (manrepeller.com). This site is notable because it is quite different from most of what is out there. In her blog, Medine uses her intelligent, iron­ic, semi-sarcastic and undeniably hilarious voice to explore the haute-couture, funky and over-the-top looks that women love regardless of whether or not it is appealing to the male sex. Medine advocates “outfitting oneself in a sartori­ally offensive way that will result in repelling members of the opposite sex. Such garments include (but are not limited to) harem pants, boyfriend jeans, overalls, shoulder pads, full length jumpsuits, jewelry that resembles violent weaponry and clogs.” The blog can get a bit raunchy and risqué at times, so be prepared. But it is refreshingly unrefined and dangerous.

So, begin your foray into the fashion blogosphere. You are sure to enjoy it.