In The Light: Mike Newberg 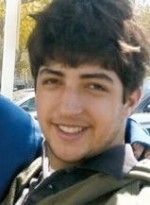 For the past four years, senior Mike Newberg has had a significant impact on the Colgate campus. The political science and anthropology double major described himself as “a go-getter, responsible and in­volved,” and he has certainly lived up to these terms at Colgate.

Currently, the senior is the Vice Presi­dent of the Student Government Associa­tion. The senior also balances his time as the Manager of Annual Funds Student Calling Program, a member of Konosioni, Colgate’s Honor Society and a member of the fraternity Theta Chi.

Newberg knew he was meant to be at Colgate during his April Visit Day. “I met a lot of good people on my April Visit Day and I could see myself on the campus,” he said.

Similar to many other students, the Buffalo, New York native’s favorite aspect of Colgate is the campus itself.

“The isolation at Colgate is actually a good thing. It’s nice to not be distracted at a residential college where everyone is trying to learn,” the senior explained.

The senior’s favorite moment at Col­gate was having the honor of speaking at President Jeffrey Herbst’s inauguration.

“There were Presidents from all dif­ferent colleges at the inauguration and it was nice to be able to represent Colgate students,” the senior said.

After graduation, Newberg would like to go into television production. In fact, he spent last summer as an intern at the CNN headquarters in Atlanta. During his internship, Newberg was able to produce two pieces that aired on CNN.

For his senior thesis, Newberg is follow­ing his interest in television production by working on a documentary for anthropol­ogy on the local Hamilton Movie Theater.

When asked about how it felt to be in his last semester at Colgate, Newberg described it as “bittersweet.”

“I loved every minute at Colgate and I really tried to do everything here. It’s been the best four years of my life,” the senior reflected.

Newberg encourages other students to follow in his footsteps at Colgate.

“Get involved in everything. There are so many opportunities to get involved and it’s important to make the most of it.”