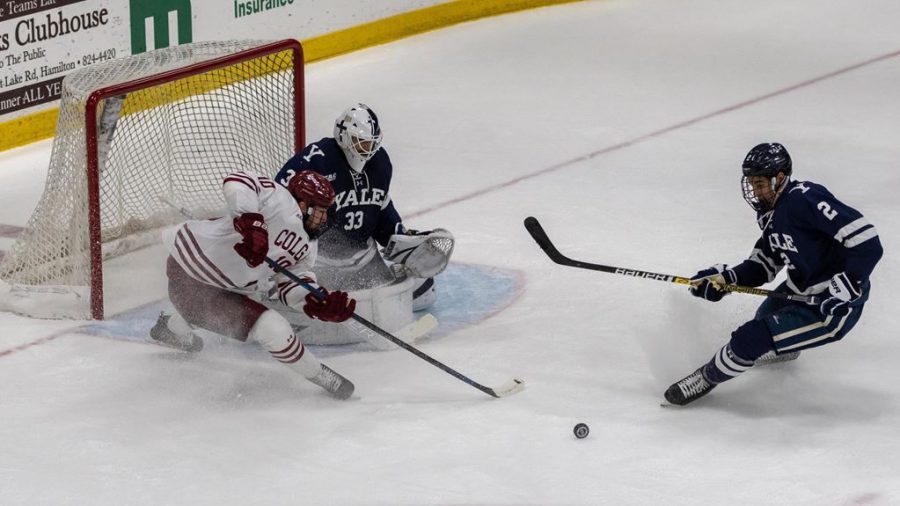 It was an eventful weekend for the Colgate athletic teams. The men’s hockey team kicked off ECAC action over Silver Puck Weekend, the football team won at home on Senior Day and the volleyball team extended its win streak.

Cotterell Court hosted the volleyball team as they swept by Lafayette 3-0 (25-18, 25-17, 25-18). The Raiders moved to 12-1 after the win, and two aces by senior Alex Stein and junior Alli Lowe highlighted the win. With eyes set on the Patriot League Conference playoffs, the team is poised for a run.

“This team has been talking about what it takes to win the Patriot League tournament since this January when we started our spring training, which has made it really easy to keep a focused mindset. The upperclassmen have experienced what it feels like to fall short at the end and not end up winning and that is something that we knew that we were not going to tolerate this year, and we have been putting in the work to make sure we come out on top,” Lowe said. “This team has gotten to the point where all we have  to focus on is continuing to play together and play for each other in order to win. The skill and the drive is there, we just have to keep playing our game.”

The Raiders were back in action against Lehigh on Saturday, November 9, hoping to continue challenging for the first seed in the standings.

Silver Puck Weekend commenced with Colgate men’s hockey taking a 2-1 win against Yale at the Class of 1965 Arena. The first frame saw all of the Raiders’ scoring, with first-year Colton Hall opening things up. Junior forward Paul McAvoy followed up the first-year’s tally less than two minutes later.

Yale’s Curtis Hall cut the lead in half, but sophomore goaltender Mitch Benson’s 34 saves were enough to hold the lead. Benson improved to 2-4-3 on the year after the win.

With another opportunity to beat Clarkson after the Frozen Four a few years ago, the Colgate women’s hockey team could not overcome a 2-1 road deficit. Senior goaltender Liz Auby recorded 28 saves and sophomore defense Tanner Gates scored Colgate’s only goal of the game in the second period. The loss marked the team’s second in conference play; another chance to find a win would come the next day against St. Lawrence.

The Raider football team beat Fordham 24-14 at home on Senior Day to improve to 2-3 in the conference. A consistent touchdown per quarter through three frames paced the scoring for the Raiders. Alex Mathews opened the scoring with a ten-yard rush to put the Raiders up 7-0.

Diaco was then on the receiving end of a 23-yard pass from junior quarterback Grant Breneman, once again upping the lead for the Raiders to 21-13 and further filling out his stat sheet in his last home game. Chris Puzzi drilled a 23-yard field goal in the fourth quarter to seal the deal.

Next, the Raiders will visit Lafayette to close out the Patriot League season on November 16.

“Our collective focus all season has been to work hard, improve over time, and then find a way to win on November 24. So at this point in the season, it’s really exciting to say that there’s no doubt in my mind we will find a way. This team works so hard and has loads of talent, but what’s driving us to success is our competitiveness and cohesiveness,” Stein said.

Next, the Raiders will travel to Navy and Bucknell to close out the season on November 15 and 16, respectively. The Patriot League quarterfinals are set to be hosted in Hamilton on November 19.

Silver Puck Weekend came to an end with a Raider loss to Brown 4-1 at home. Colgate dropped to 1-1 in ECAC action and 2-5-3 on the season.

Next, the Raiders visit St. Lawrence on November 15 before taking on Clarkson in Potsdam on November 16. The team will be back in Hamilton to face Princeton and Quinnipiac the following weekend.

A scoreless evening against St. Lawrence came to an end and the women’s hockey team walked away with a point from a tough weekend.

Next, the Raiders will look to get back in the win column while hosting ECAC opponents Brown and Yale on November 15 and 16 before the Big Ten’s Ohio State Buckeyes come to town for a two-game series on November 22 and 23.