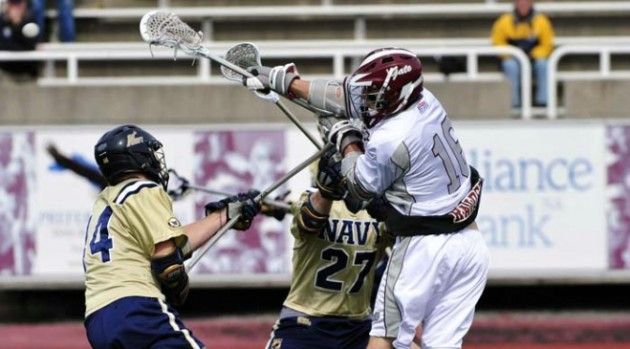 The Colgate Men’s Lacrosse team be­gan their regular season on a tough note, suffering a loss on the road against ninth-ranked Hofstra 3-6 on February 15th and another at Vermont on the 20th, 4-9. The pair of losses marks the third time in four years that the Raiders have opened the sea­son with two losses, so it is quite possible that the Raiders are merely experiencing a slow start and that they will be able to right the ship at Dartmouth on February 26.

At Hofstra in the season-opener, the Pride scored the lone goal of the first quarter, but Raider first-year Brendon McCann countered with the first goal of the second quarter off a pass from junior attackman Patrick Campbell. Unfortu­nately, the Pride then launched a four-goal run, capped off by a tally put past Raider goalie Jared Madison with only 57 seconds remaining in the half. Although the Pride entered the second half with a comfort­able 5-1 lead, Colgate senior attackman and co-captain Andrew Mould registered an unassisted goal that stood as the lone point of the third quarter for both teams.

Mould found the back of the net again at the start of the fourth quarter off a feed from sophomore Peter Baum, but was unable to kick-start a Raider come­back. Hofstra registered one more tally mid-way through the fourth that would mark the final goal of the contest. Al­though the Raiders were successful with clears and controlled the faceoff circle— completing 13 of 14, and winning eight of 13, respectively—Hofstra scooped up 25 groundballs to Colgate’s 14. The two teams were nearly identical in every other statistical category, and had the Raid­ers stifled the Pride scoring burst in the second quarter and won more ground­balls, the game may have had a very different outcome.

At Vermont the following Sunday, the hometown Catamounts jumped out to an early lead, scoring three goals in the first seven minutes of the quarter. Mould countered the Catamount run a minute later with an unassisted marker. Vermont answered, making the score 4-1, but Baum found Mould for his second goal of the quarter. The Raiders found themselves with a man-advantage at the start of the second courtesy of a Catamount offside penalty, and sophomore attackman Mi­chael Thomas capitalized off an assist from McCann. Vermont chipped in two more that quarter, though, establishing a solid 6-3 lead heading into halftime. McCann scored the lone goal of the third quarter, bringing the Raiders within two, but the Catamounts ripped off three unanswered goals in the fourth, securing a 9-4 victory. Colgate was once again very strong on fa­ceoffs, winning 10 of the 17 draws, and picked up 26 groundballs to Vermont’s 24.

The defense appears to be the area of pri­mary strength after the season-opener, hold­ing a high-powered Hofstra offense to only six goals. Moreover, given that the team has matched its opponents in most other catego­ries, such as faceoffs and clears, it appears that the offense has to execute better if the team is to win games. Seven goals in two games may not seem much, but the offense has created scoring chances—they outshot Hofstra 23 to 19 in the first game—and should be able to convert these chances as the season pro­gresses, making for a very well-rounded and capable team.

Colgate faces Ivy League foe Dartmouth in Hanover, New Hampshire on Saturday at 2:30, in what will be the home team’s first game of the season.