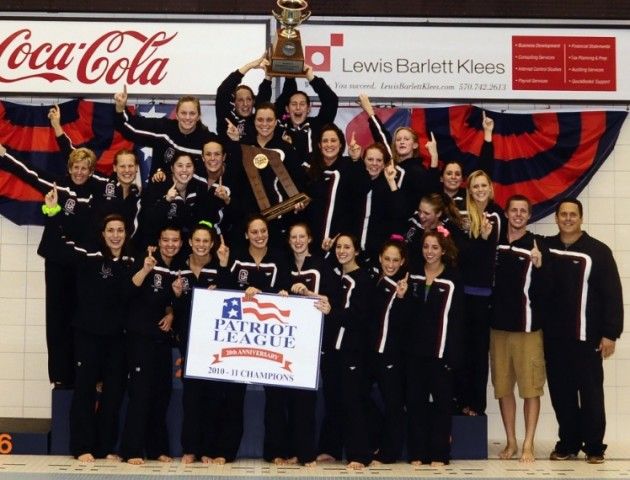 Colgate’s women’s swimming and div­ing team are the stars of Raiders Athlet­ics this week after handily clinching the Patriot League title at Bucknell over the weekend. The squad captured the lead af­ter the very first day of competition and never let up, finishing with a team total of 862 points. The men’s team also traveled to the meet, but did not experience the same noted level of success. They finished fifth place overall with a final tally of 363 points.

The real narrative is in the women’s Patriot League competition, where they held onto the first-place spot for three consecutive days to completely dominate the meet.

The team finished the first day of rac­ing with 198 points and swept the top three positions in the finals. Erica Derlath swam brilliantly, finishing over a second earlier than teammates Caren Guyett and first-year Claire Hunter, who also contrib­uted to the Colgate victory. Senior Erin McGraw added to the total point count by earning the 200-yard individual med­ley title as she beat her personal best time by just under a second. Sophomore Emma Santoro and first-year Megan Jex followed closely behind.

The second day of competition marked a slew more of Colgate victories. Sopho­more Kim Pilka shattered the old 1-meter dive record with a score of 303.40 to blast Army’s Chelsea Haviland’s 2006 mark of 291.85. The 800-yard freestyle relay team set a new league mark to give the Raiders a comfortable margin above their trailing opponents. The relay team of McGraw, Hunter, Santoro and Guyett also shattered an old Colgate record by 1.5 seconds. Their time of 7:20.09 also became the new Patriot League, championship meet and Kinney Natatorium record.

Guyett also did some personal record breaking on the second day of the com­petition in the 200-yard freestyle with a time of 1:47.61, more than a second off both her own preliminary time and pre­vious record-holder Lisa Marchi’s time of 1:48.93.

McGraw rose to the occasion in the 100-yard butterfly as the Raiders had three women place in the top five to earn 50 points towards the team score. Mc­Graw won her first individual title with a time of 54.36 seconds, just missing her record time of 54.02 seconds.

Rebecca Murray and Maggie White also contributed to the team tally after finishing the 100-yard breaststroke at third and seventh, respectively.

On the final day of competition, the Raiders’ spirits were high. Their times and scores could not be beat and their confidence could only contribute to more success.

In the first swimming final of the day, Derlath won her third title of the week and broke a Colgate record in the 1650 freestyle with a time of 16:24.83, break­ing her personal record by an incredible 15 seconds. The time also broke the Pa­triot League record. Guyett also broke the previous record, but could not match the time of her teammate and finished second in the race.

At the end of the three-day competi­tion, Fernando Canales was named the Patriot League Women’s Coach of the Year, while McGraw was awarded the Fe­male Swimmer of the Meet honors. Pilka was also recognized as the top diver with the Female Diver of the Meet title. All in all, the meet marked the victorious end of a successful season for the women.