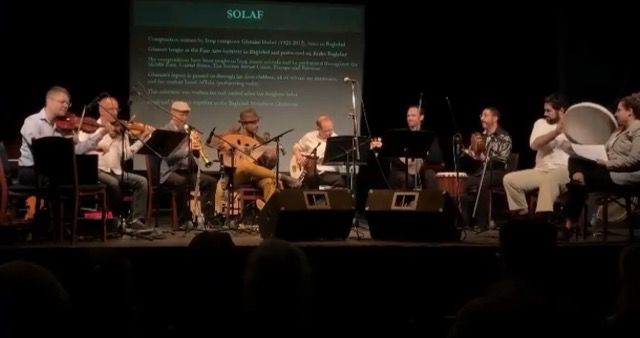 Journey West is a nine-person musical ensemble performed at Arts at the Palace in downtown Hamilton on Friday, October 25. They played mostly Middle Eastern music and their setlist brought the audience along on a journey from East to West. They opened with a melody from the Iraqi folkloric tradition and throughout the set played music from Syria, Turkey, Israel and Egypt.

The tambourine and drum player, Ayman Abdalla, is the Arabic language intern here at Colgate. Abdalla said that the set changes depending on the audience; When the crowd is mostly Arab they play more traditional pieces and when they play at a University they like to stick to their Western trajectory.

This performance was special because they had a Turkish vocalist on a few of the pieces. She sang traditional love songs and a traditional Alevi folk song. The ensemble rarely features vocalists so this performance was a unique opportunity for both the band and the audience members. The performance also alluded to tensions one might encounter in a physical journey through borders as the Turkish vocalist was asked to introduce the next song, which was written in honor of the many Greek and Armenian victims of Turkish violence.

Sophomore Ani Arzoumanian felt a personal connection to the themes presented by the music, “I am Armenian and I appreciated the recognition of Turkey’s violence against minorities, but I was surprised to hear that at a Middle Eastern concert! I think it’s important to understand the cultural histories of music and sometimes, unfortunately, violence is a part of that,” he said.

Before the music started, the ensemble’s logo was projected onto a screen. The logo, which was designed by the daf player Martine, spells out “Journey West” with Arabic characters to highlight the mixing of cultures that their ensemble strives to achieve. According to Abdalla, “most of the members are American and live in Ithaca, but we have one Irani musician, one Iraqi, and me.” Abdalla is Egyptian and on-campus he helps Arabic students learn the Egyptian dialect of Arabic. He travels to Ithaca twice a month to practice with the ensemble. They also presented examples of the fusion of cultures within the Middle Eastern region by playing a mash-up of an Egyptian song and an Iraqi song. As the group began to play, the logo faded into informational slides about each piece. The slides offered information about composers, arrangers and context. The information helped create a fact-based educational experience for the audience.

After the performance trays of catered Middle Eastern food were available to all, leaving a thoroughly happy audience. Sophomore Sowon Kim said, “I went because Ayman was performing but it exceeded my expectations, I loved the short introductions for each music and how musicians came downstage at one point and made it interactive. I felt like I was back in Egypt again.”