In The Light: Colleen Schnieder 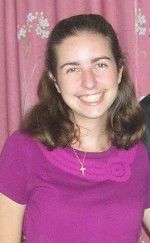 When it came to choosing a college, Colgate was the perfect choice for senior Colleen Schneider.

“I wanted a liberal arts school because I wanted to study a lot of different things, and I wanted it to be academically chal­lenging,” the senior said. “I also wanted to be in the East where there was snow on the ground all winter.”

The neuroscience major and French minor hailing from Colorado is involved with the Colgate Christian Fellowship and was its president in 2009. She also plays the flute for Colgate’s wind ensem­ble and is currently a member of Colgate’s senior Honor Society, Konosioni. When Schneider isn’t busy with her demanding work and extra-curricular schedule, she is an apartment manager on campus and has been a Resident Advisor in the past.

Schneider studied abroad her junior year in Senegal, where she learned the na­tive Wolof language and interned with a physical therapist.

“It was a good opportunity to learn about a culture experientially and be im­mersed in the culture, rather than just learn about it,” explained the senior.

Schneider’s favorite memory at Colgate is from her first year when Kirk Franklin, a Gospel singer, came to campus.

“The chapel was packed with Colgate students and the community. Everyone was singing and dancing. There was just such a sense of community that I will never be able to forget,” described the senior.

Another unforgettable experience at Colgate was Schneider’s neurochemistry class.

The greatest thing about Colgate for Schneider is the relationships with profes­sors and the ability to do research as an undergraduate student. Schneider’s curios­ity has inspired new directions in her own research. She has spent summers in Cleve­land and Denver with leading researchers in multiple sclerosis. After she graduates, Schneider is going to take two years off to do research on multiple sclerosis and later plans on attending medical school.

Schneider’s advice to other students follows her own personality.

“Don’t be afraid to be curious and to explore the answers to those curiosities,” she said.

“I look back at my time here and I am amazed by everything I’ve done and the opportunities I’ve had. I’m very thankful for what this place has become.”