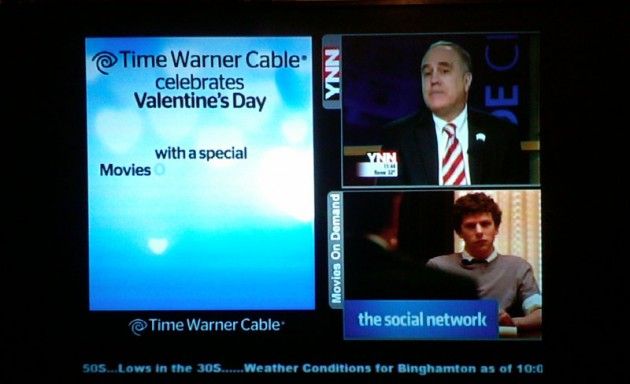 Cutting the Time Warner cable service was first suggested by the Economic Environment Working Group (EEG) in spring of 2009. EEG was charged with finding ways to restructure Colgate’s bud­get and stave off spending deficits in the wake of the 2008 recession.

Vice President for Finance and Administration David Hale served as co-chair of the EEG and saw cut­ting the $80,000 a year cable service as an opportunity to both save mon­ey and eliminate an outmoded and disused service.

“[Cable] was identified because many students seem to be watching via their laptops … and we shouldn’t be providing a redundant service,” Hale said. “There was a survey by Residential Life on TV usage … and my impression was that many students watched TV using Internet services. So we said ‘let’s explore it.'”

Chief Information Officer Da­vid Gregory was charged with re­searching and exploring alterna­tives to cable television. Though his research indicated that students were in fact watching more and more television online, the alterna­tives that were tested and explored simply could not provide the same level of variety and reliability that the current service has.

“With devices like Apple TV, sometimes you have good expe­riences, sometimes you don’t,” Gregory said. “Stopping to load seems to be part of the experience. I think we’ll get there, but the con­tent and programming needs to get there as well. I think it is going to be a matter of time before we get some good alternatives.”

One of the biggest problems in removing cable would be among sports programming, which is of­ten not available online. In par­ticular, events like the Super Bowl – which is not broadcasted online – would pose a problem to stu­dents. The solution proposed by Gregory: locations around campus (the Coop, Donovan’s Pub) where programming would be offered.

“We are still looking into TV lounges,” Gregory said. “If the pro­gramming is not available on the Internet (the Super bowl, World Series, etc) we would have these event locations – 4 or 5 locations on campus where we would get Dish TV and get people together and watch the game.”

Though talks about eliminating cable continue, Hale offered some definitive words on the direction the administration was leaning.

“Right now, for the 2011-2012 academic year, we aren’t going to make a change,” Hale said. “The technology hasn’t caught up with what we are providing. But we should be continuing to explore the option.”

Gregory recently appeared in front of the Student Govern­ment Association (SGA) to field questions about what eliminating cable would mean for students. Of biggest concern to senators were CUTV and Colgate sports, which are currently available only through cable. Gregory admitted that there is no current way to of­fer broadcasts of Colgate sports without cable service, but that CUTV could find ways to offer their programming online.

President of SGA senior Liz Brodsky sympathized with Gregory’s sentiments and expressed her will­ingness to cooperate, but personally is concerned about Internet speed and the level of technology available.

“The feel of the Senate and SGA is that we need to keep it,” Brodsky said. “But I think it is important to get the numbers on who is actu­ally watching cable TV. I’m trying to meet with David Gregory to see where we go from here … if I had stats on who watches TV it would sway my opinion, but I don’t think we are ready, or the Internet is ready, to eliminate cable next year.”

Sophomore Matt Ford echoed Brodsky’s views and took issue with the problems that sports fans would face if cable were removed.

“People like watching live sports in the comfort of their own rooms,” Ford said. “I’m not going down to Donovan’s for a regular game that isn’t online. When more sports are online I will totally support it, but it is just not there yet.”

Though cutting cable doesn’t seem to be a viable option for next year, Hale made it clear that cutting the cable service is still on the hori­zon, and that students can be a part of this process by informing the ad­ministration of the technology that is available.

“We also don’t want to lose sight of [cutting cable],” Hale said. “The way I viewed it, when it becomes a redundant service, we should elimi­nate it. We’d like to stay in touch with students … I think this is a case where students can be informing us about what is available.”